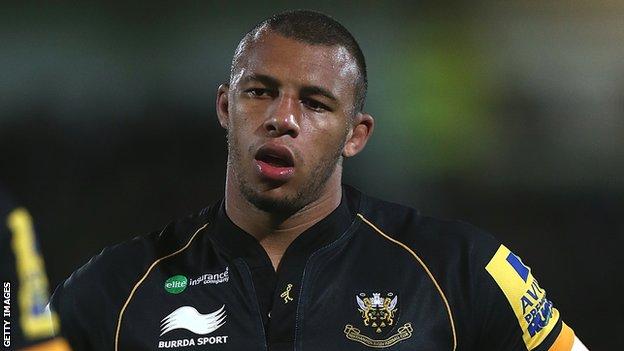 Northampton Saints boss Jim Mallinder has said flanker Courtney Lawes will not regain his best form until he is fully fit.

Elbow and shin injuries have restricted the number of games he has played, particularly at the end of last season.

"We've got a strong squad and the players have got to play well every week," Mallinder told BBC Northampton.

"Courtney has come back from injuries and sometimes when you do that you're not always on top form. Courtney now needs a number of games back-to-back to get into top form."

Courtney Lawes made his 100th Northampton saints appearance when he stepped off the bench against Ulster at the weekend.

He made his debut on 20 October 2007 against Esher in the old National One - now the Championship.

Lawes was pulled from the starting line-up to face Ulster in Saturday's Heineken Cup victory at Thomond Park, following at Franklin's Gardens a week earlier.

But the 15-times England cap stepped off the bench with an hour remaining to help secure a famous 10-9 victory and register his 100th appearance for Saints.

"He's a Northampton lad and it's fantastic to see him doing well for the club and for England," said Mallinder.

"He's still young and has things to improve on. But it's fantastic he's made 100 caps

"Every time we go into the changing rooms and we see some of the names of the all-time greats that have played for Northampton and the number of games they've played - it's something to aspire to."

Lawes, whose only England appearance during this year's autumn internationals came as a replacement in the historic added: "I was glad I got on early against Ulster and got in 60 minutes and proved I can go out there with the best.

"You can always get better and I've still got a bit of fitness to come my way. But I feel good and I'm hoping to get a good run of games and get back to top form."