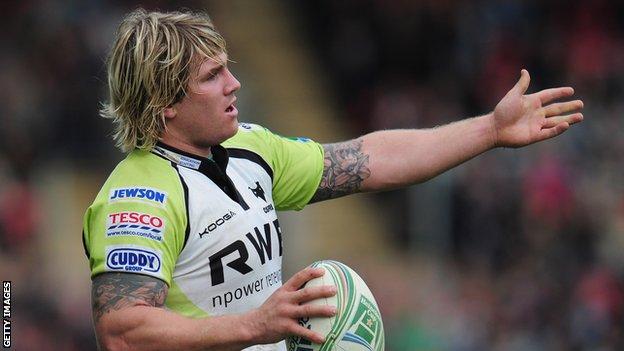 Hooker Richard Hibbard believes the Ospreys' impressive Heineken Cup victory over Toulouse has given the region a massive lift in confidence.

Hibbard was part of the Ospreys team which beat the former European champions 17-9 at the Liberty Stadium.

It is a win that he insists has re-ignited the Welsh side's Pool 2 hopes.

"It's given us a big boost [beating] a heavyweight in Europe. We know we can compete with the likes of Toulouse now," said the Wales forward.

"We have two big games left in Europe. It's not quite over yet. It's still a possibility. It gives us a lot of confidence going into that."

The Ospreys are still third in Pool 2 behind leaders Leicester Tigers and Toulouse with two games left against Leicester and Benetton Treviso in January.

If they win both of those matches they could put themselves in with a slim chance of qualification for the quarter-finals.

So far Ospreys are the only one of the three Welsh regions to win in the Heineken Cup this season.

But before that European doubleheader, the Ospreys have to turn their attentions to a RaboDirect Pro12 derby against the Scarlets at the Liberty Stadium on Boxing Day.

The Ospreys got their season back on track with a 23-16 win at Parc y Scarlets in September after losing all three of their opening games.

And Hibbard is concerned the Scarlets might take a leaf out of the Ospreys' book as they have lost their last three matches, including two against Exeter Chiefs.

"It's going to be tough - the usual tug of war game," said Hibbard.

"They [the Scarlets] will be definitely up for this game [after losing three games in Europe]."