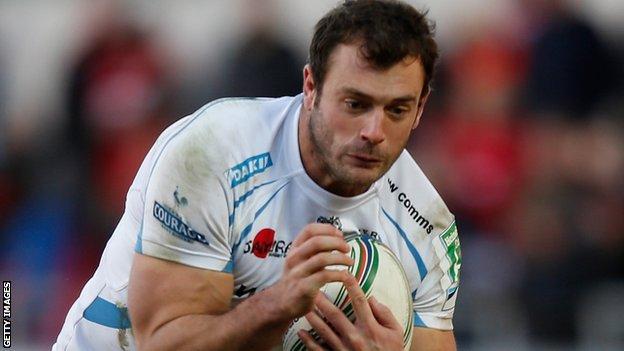 Exeter full-back Luke Arscott has signed a new contract that keeps him at Sandy Park until the summer of 2015.

The 28-year-old joined the Chiefs in the summer of 2010 after four years with Bristol, having previously been with Exeter as a youngster.

"He's been a cornerstone of our back division in our time in the Premiership," boss Rob Baxter said.

"What we've got to do is maintain his form and knock on again in the next couple of years," Baxter added.

Arscott has been Exeter's first-choice full-back since returning to the Chiefs, playing 52 games and scoring six tries, and signed an extension to his deal almost two years ago.

"He was one of the first guys we brought in when we got promoted," Baxter said.

"It was probably a bit of a difficult position for us to get the right body in for two or three seasons and Luke settling in there strengthened us immediately."

Baxter expects more players to sign in the coming weeks as he gets his squad ready for next year's campaign ahead of the start of January, when players coming to the end of their deals can begin talks with other clubs.

"I'm really pleased with how the recruitment and retention side of things is going.

"There won't be the huge amount of changes next season that I didn't want so that's fantastic for us.

"If we do make three or four acquisitions or changeovers in the market after 1 January that'll probably be the number we'll want to make."

Despite being granted a work permit, Exeter are still waiting on international clearance from the Fijian Rugby Football Union, which is being hampered by bad weather.

"They're aware that we're awaiting the international clearance

"It's not something we see as a long term problem, we're assuming the final bits of the paperwork will be in place as soon as the communications side of things is sorted.

"Unless there are any injury problems he's not going to be featuring in the Premiership side for a couple of weeks.

"He's got to wait until we get a second team game organised or the LV= Cup games, those opportunities will be the first chance we'll get to have a look at him."