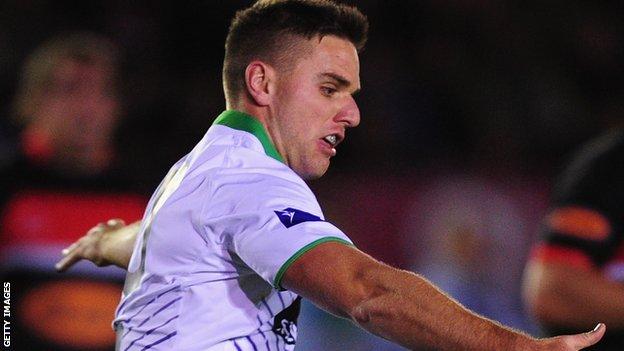 Championship strugglers Jersey boosted their hopes of survival with a hard-fought 20-17 win over Leeds.

The islanders trailed 10-3 at the break, with David Doherty's try against his old club the difference between the sides.

Jersey soaked up plenty of pressure before touched down to pull the hosts level.

A penalty try and Michael Le Bourgeois penalty put the island side ahead but Doherty's second set up a tense finale.

It was a great result and the boys are delighted

Jersey held on for their third league win of the season, a victory which takes them off the foot of the table and a point above Doncaster and Moseley, although both sides have a game in hand over the islanders.

The hosts had started the game well and went in front through Le Bourgeois' boot only for Joe Ford to equalise and then, on the half hour, winger Doherty to find space out wide to score in the corner.

Leeds threatened to extend their lead after half-time but it was Jersey who got the breakthrough when Stelling, making his first Championship appearance, crossed the line.

It proved a turning point and when a powerful Jersey scrum was rewarded with a penalty try, a second win over Leeds this season looked possible.

Le Bourgeois held his nerve with a penalty to ensure that even Doherty's second try late in the game could not steal the win from the home team.

"It was terrific against a very, very tough side," said Jersey boss Ben Harvey.

"It was a great result and the boys are delighted.

"We started much better, we asked for a big start and we thought it was terrific."

Doherty's second try at least meant that Leeds left the Channel Islands with a losing bonus point but coach Diccon Edwards was critical of the standard of the pitch after heavy rain hit the island overnight.

"I thought the conditions were appalling to play in," Edwards told BBC Radio Jersey.

"Both sides tried to play at times but it was a lot easier without the ball than it was with it.

"It was difficult under foot but I thought we had enough chances to win the game."