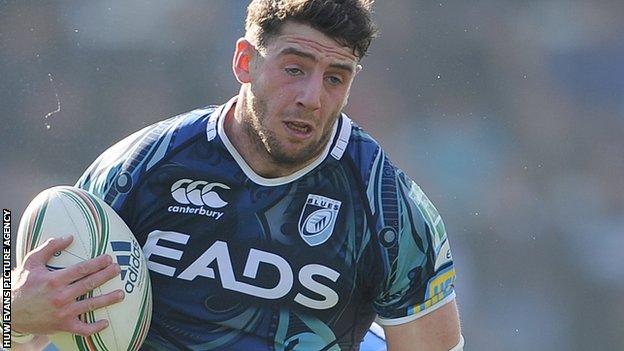 The Wales wing, 22, said he rejected offers from other clubs to stay with the Welsh region until May 2016.

"I had a lot of decisions to make but I'm glad I've got it sorted and this is the place I want to be to take my rugby career forward. I'm glad it's all sorted now," Cuthbert said.

"I did have some good offers from other clubs but I wanted to stay with the Blues."

The 6ft 6in Wales wing, who made his Test debut as a replacement against Australia in 2011, had been linked with a move to Racing Metro or Toulon in France.

But the 13-times capped international, who was born in Gloucester, has bucked the player-drain trend out of Wales by staying with the Blues.

And Wales centre Jamie Roberts has announced he will leave the Blues at the end of the season.

Under new director of coaching Phil Davies, the Blues have lost 11 of 16 games this season but Cuthbert feels the region has a bright future.

He added: "I've certainly seen the progress on the pitch, although we may not be getting the results right now, we are just losing by narrow margins and you can tell it's coming.

"Hopefully we will get some quality players in next season and those close losses will turn into wins for us."

Cuthbert has scored 21 tries in 27 appearances for the Blues and five in 13 for Wales.

He has established himself as a regular in the national side and Davies underlined Cuthbert's importance to his future plans at the Blues.

"Alex is a great try scorer but he is still young and developing all the time," said Davies.

"His work rate is phenomenal and his defence and reading of the game is improving considerably. Hopefully he will get better and better over the next three years."