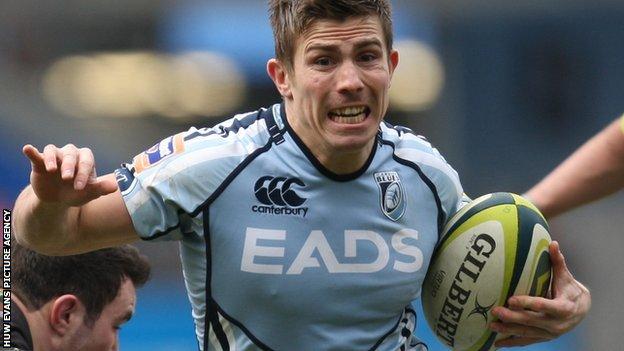 Cardiff Blues wing Richard Mustoe has retired because of injury.

The 30-year-old injured his pelvis in a Pro12 game against Treviso in March and been advised not to play again.

Mustoe started his career at Bridgend and joined Celtic Warriors following the introduction of regional rugby.

"It's been difficult being forced to finish through injury. I've always enjoyed playing rugby, regardless of whether I was a professional or not," he said.

Mustoe, who represented Wales at Sevens, combined his rugby career with running a funeral services business.

He now intends to move into coaching, having already had a taste with Division Two West side Maesteg.

"Playing for the Blues was one of the highlights of my career and I will always be grateful for having the opportunity to represent the region and for the level of support they have shown during my time with them as a player, especially during this recent injury," Mustoe added.

"Although I have been full time as rugby professional I have also continued with my career as a funeral director.

"So as far as a career after rugby it was always my intention to continue as an undertaker full time, just maybe not as early as this."

Mustoe scored 10 tries in 68 appearances for the Blues since joining them in 2008. He also played for Ospreys and Newport Gwent Dragons.