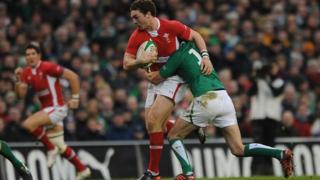 The Welsh Grand Slam in 2012 started with a nail-biting victory over Ireland in Dublin.

Legendary scrum half Gareth Edwards recalls the tries, the yellow cards, and the last-minute Leigh Halfpenny kick which clinched a 23-21 victory for Wales at the Aviva Stadium on 5 February.

We also witnessed the power of George North as Wales took the first difficult step to a third Six Nations Grand Slam in seven years.