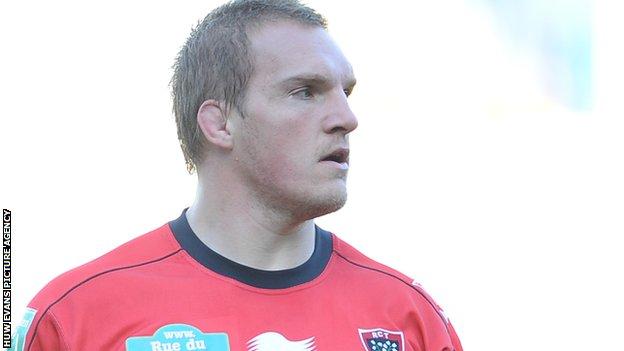 Cardiff Blues have revealed they have failed in attempts to re-sign Gethin Jenkins for next season.

Wales prop Jenkins left the Blues at the end of last season to join French club Toulon on a two-year contract.

The 32-year-old has largely been second choice to England's Andrew Sheridan and has been linked with a return to Wales.

"We've tried very hard to get Gethin to return to Wales, but unfortunately we've gone as far as we can go," said Blues chairman Peter Thomas.

"We are trying to very hard to accommodate him."

The Welsh Rugby Union, concerned by the loss of Wales' best players to France, has been involved in the negotiations to bring Jenkins back to Wales.

No financial support has been part of those discussions, said Thomas, whose bargaining options are limited by a £3.5m salary cap.

Toulon are willing to release Jenkins from his contract, but attempts to agree a financial package between all the parties concerned have so far been unsuccessful.

"At the moment I would say it's over, but you can never tell," said Thomas in an interview on BBC Radio Wales' The Back Page programme.

"In negotiations, you never know who's going to pick up the 'phone tomorrow or knock on your door. We must always have an open mind.

"We all know Gethin is a world-class player and we'd like to get him back. We're doing our best, we've tried our best but at this moment in time I must say I think the door is closed."

The Blues fared better with other negotiations this week by persuading Alex Cuthbert to sign a new three-year contract.

Cuthbert's decision to stay in Wales bucks the current trend of a player drain to France, which has seen Jenkins, Mike Phillips, James Hook and Luke Charteris among the Wales internationals moving from Welsh regions.

The Blues have failed to keep Jamie Roberts, though, who has announced his intention to leave at the end of the season. Racing Metro is the centre's expected destination.

Thomas's next priority is to extend the contracts of Wales captain Sam Warburton, full-back Leigh Halfpenny and lock Bradley Davies who have 18 months to run on their current deals.

"It's very important that the timing of these discussions is right," added Thomas, who conceded that better results on the pitch will make those negotiations easier.

"I can tell you now that Sam Warburton, Bradley Davies, Leigh Halfpenny... they are amazing players and, importantly, amazing young men.

"I've got every confidence in them, like Alex Cuthbert, they are Blues through and through."

The Blues lost 15 players from their squad at the end last season through a combination of retirements, transfers and, in the case of Gavin Henson, a dismissal.

"I can see three or four worldwide international names joining the Blues next season," promised Thomas.

"We recognise where our weaknesses are at the moment.

"We've now gone out to plug those gaps and our recruitment team have come up over the last several months with proposals and names and we are well down the road of concluding those discussions.

"I've no doubt that when they are published people will be pleased with the work that has been done."

The Blues suffered a on Friday night as they entered a busy period of holiday matches.