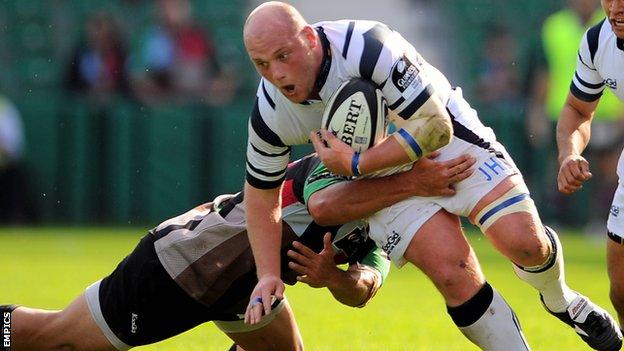 Bristol have confirmed they will appeal against the 12-week ban handed to Jason Hobson by the Rugby Football Union.

The prop was charged with biting Plymouth Albion's Bevon Armitage on the arm during a mass brawl in Bristol's 21-8 victory in November.

Both clubs received a suspended five-point deduction after the incident.

Hobson pleaded not guilty to the charge but now that an appeal has been lodged, the 29-year-old Welshman is free to play until it is heard.

The Scotland U20s international has made 13 appearances this season, scoring two tries.

"Mitch has been a consistent performer this season and is showing real maturity in his development," said head coach Liam Middleton.

"He displays many of the traits that we are seeking from our players, both on and off the field.

"I see his outstanding development potential working congruently with that of Bristol and he has a part to play in shaping the success of the club in the next few years."