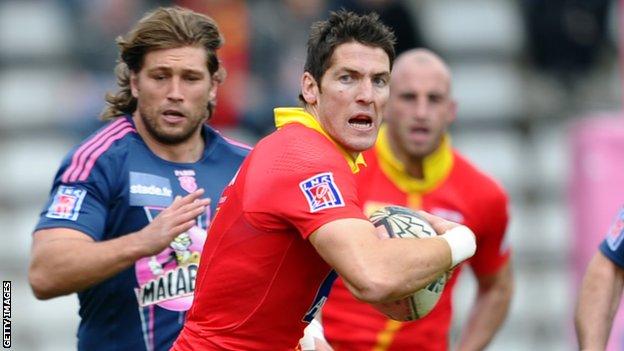 Fly-half James Hook has joined Wales' injury list, but is expected to recover ahead of the 2013 Six Nations.

Hook, 27, bruised his chest during Perpignan's 46-13 French Top 14 defeat by Toulon on Sunday.

A scan has revealed no major damage but Hook will be sidelined for two weeks with the injury.

The Welsh international is expected to be fit for Perpignan's 25 January clash against Clermont Auvergne in the Top 14.

Charteris, 29, ruptured medial knee ligaments during the Top 14 clash against Montpellier, ending his hopes of making the British and Irish Lions squad to tour Australia in the summer of 2013.

Hook's injury is the latest ahead of Wales' Six Nations defence as the 67-cap player joins long-term Achilles injury victim Rhys Priestland on the sidelines.

Charteris, who left Newport Gwent Dragons to join Perpignan during the summer, missed most of last season's Six Nations due to a wrist injury.

Scarlet Priestland suffered his injury in the Heineken Cup against Exeter and is unlikely to play again this season.

Ospreys prop Jarvis went off with a knee injury during the early minutes of Wales' defeat against world champions New Zealand in November.

Injuries hampered Wales during the recent autumn series and prop Adam Jones and flanker Dan Lydiate were ruled out of games against Argentina, Samoa, New Zealand and Australia.

Jones continues his comeback with the Ospreys, but regional team-mate Alun Wyn Jones is currently sidelined with shoulder trouble,

Another Ospreys player, second-row Ian Evans has a knee injury and Cardiff Blues backs Jamie Roberts and Leigh Halfpenny are both currently out.

There are also fitness doubts over hooker Ken Owens and prop Craig Mitchell.

However lock Bradley Davies returned to action in Cardiff Blues' 6-9 defeat by the Scarlets in the Pro12 on Friday, 21 December.

Wing George North also featured for the Scarlets in the match at the Arms Park after missing the defeats against the All Blacks and Wallabies because of a hip injury.