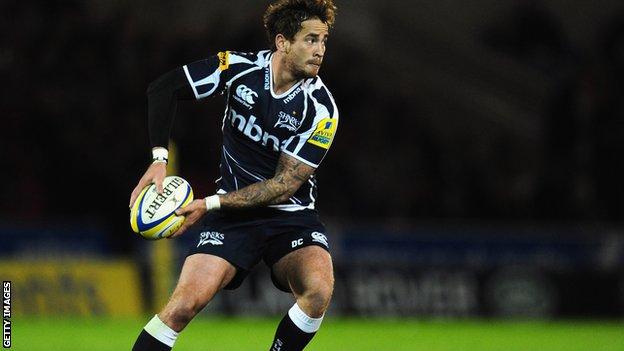 Danny Cipriani inspired Sale to their second win in the Premiership this season as they beat Worcester 33-27 at a windswept Salford City Stadium.

Cipriani was dropped for Saturday's defeat at Wasps but returned to claim an 18-point haul against the visitors.

Worcester opened the scoring after five minutes with Goode's first penalty and he kicked two more in succession to put the visitors into an early 9-0 lead.

Gray touched down under a pack of bodies in the 21st minute to get Sale on the scoresheet and Cipriani's penalty cut the deficit to only two points.

Best then went over for the Warriors before Goode converted but they lost full-back Chris Pennell to the sin-bin 10 minutes before the break for holding down.

The man advantage allowed Cipriani and hooker Marc Jones to combine and send Gaskell over unopposed just before the half-time whistle.

Goode extended the visitors' advantage after the break with another penalty but Cipriani kicked two of his own to put Sale in front for the first time.

But Worcester refused to lie down and responded again through Goode's fifth penalty but when Cueto scampered over in the 59th minute the hosts looked set for their second league win.

Cipriani then kicked two more penalties which meant Kvesic's late try meant nothing more than a bonus point for the visitors as Sale moved to within one point of second-from-bottom London Irish.

Sale director of rugby John Mitchell said of Danny Cipriani's display: "He played well and defensively showed some improvement tonight, but I'd still like to see him get his shoulders on and I'm sure everyone would.

"He stiffened up defensively, which is what we've asked him to do and that is a sign of a player wanting to improve, but I don't think it's so much about him, ultimately it's not about any individuals.

"As you could see, that was a very good team effort and clearly, with a guy of his (Cipriani's) class, we need him to be at that level every week - not just one in three."

Worcester head coach Richard Hill said: "One point is better than nothing but Sale deserved the win today.

"They were fighting for their Premiership survival and I thought they looked very sharp. But we assisted them by having to play 20 minutes of that game with 14 men.

"Sale knew they had to perform tonight and they rose to the occasion very well. They put us under a lot of pressure and deserved the victory."