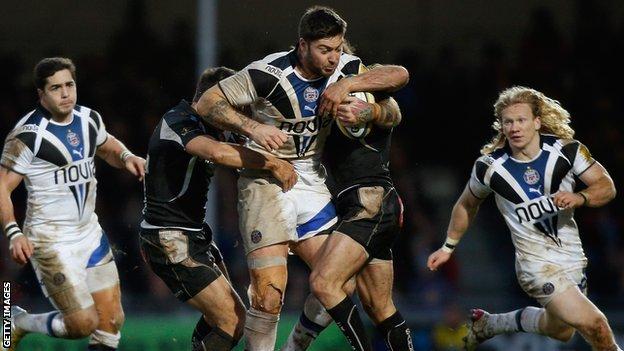 A late penalty try denied Exeter a first ever win over Bath in front of a sell-out crowd at Sandy Park.

Gareth Steenson kicked all the hosts' points as Michael Claassens's first-half try made it 6-5 at half-time.

The Chiefs fly-half added two more penalties shortly after the break to give his side a seven-point cushion.

In the 75th minute repeated infringements at the ruck by the hosts resulted in a penalty try and Tom Heathcote converted to draw the scores.

"Looking at the positives, it's the best result against Bath so far in the Premiership so in some ways we've got to say we're still taking the steps forward.

"I'm not too concerned about the penalty try, I'm a little bit frustrated by some of the penalties that got us in that position"

"We're competitive in every game we play, that's the key element for us. Last season I can remember us scraping some pretty late results that propelled us up the table, those results may still be around the corner for us."

"The resilience and bounce back from last week [against Saracens] was really important because it is a test of character.

"There was a bump in the road last week and we knew this game would be a massive test of character.

"We kept our resolve and our determination to establish field position. To keep the ball for long periods of time and then capitalise on it was important.

"Everyone talks about how well Exeter attack, and they do, but we out-scored them two tries to nil and that is a good tick in the box for us."