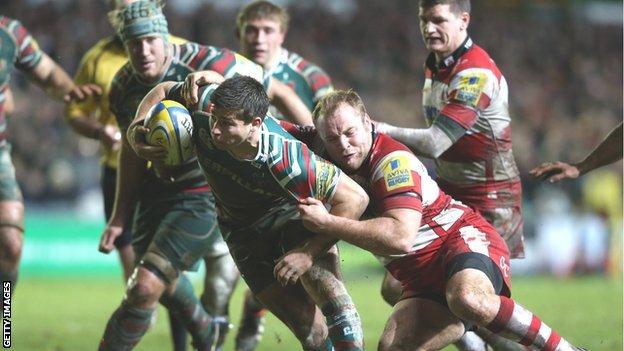 Anthony Allen's try proved the difference for Leicester in a hard-fought win over Gloucester that took them to second in the Premiership.

Tigers dominated up front in terrible conditions but went in behind after Freddie Burns outkicked George Ford.

Allen went over soon after the break and Geordan Murphy and Ford booted the hosts to victory.

Burns's boot kept Gloucester in touch but despite a dramatic late fightback they could not break through.

The result takes Leicester to two points behind leaders Harlequins on 39, although third-placed Saracens have a game in hand.

The visitors' losing bonus point keeps them fourth and they deserved to take something from the game owing to a courageous second-half performance.

Ford's fourth-minute penalty had given the hosts a brief lead before Burns wiped out Tigers' advantage with three points of his own.

The visitors were warned three times at the scrum inside the opening quarter and with 23 minutes gone Shaun Knight was shown yellow, replaced by Dario Chistolini, for boring in.

Ford missed two subsequent kicks at goal, the third shot an absolute horror, and, with the young Englishman looking uneasy, Leicester passed up several chances to go for the posts after Burns had put the Cherry and Whites 6-3 ahead against the run of play.

A seventh scrum penalty to Tigers on 32 minutes saw Marcos Ayerza hand the advantage back to Gloucester as Knight returned and Ben Youngs was sin-binned for failing to roll away.

Burns sent his third penalty attempt wide of the uprights to leave his side just three points in front at the interval, with Tigers still down to 14 men.

Just as Youngs was scheduled to return, his half-back partner Ford was sent to the stands for killing the ball after his wayward pass had allowed Burns to hack through and gather in front of the posts.

The Gloucester man made it 9-3 but he soon had his own side in trouble when his own double miss-pass put his side under pressure moments later.

Martyn Thomas failed to gather the bouncing ball and Leicester capitalised when their forwards rumbled on to send Allen over in the corner against his old club.

After 53 minutes Will James saw yellow for joining a maul from the side and Murphy kicked the resulting penalty, as Ford returned, to put the hosts 11-9 ahead.

Burns missed a difficult shot at goal, following a poor Tigers restart, and shortly after all four props were changed the visitors conceded another scrum penalty.

Ford held his nerve with two more penalties, either side of a fourth from Burns, but Gloucester rallied for a finale of high drama that saw them camped on Leicester's line in the final minutes.

"Huge relief, it was far too close for comfort.

"Some of that was of our own making, some of that was down to the referee - 10 penalties at scrum time and just one yellow card. We got two blokes sin-binned for breakdown offences when the breakdown was not that messy.

"We were the only side that got refereed at the breakdown and we didn't get rewarded at the scrum.

"If you have that much dominance at scrum and the opposition can't cope with it then the referee has to deal with it and he didn't today. Every time they got in our half we got penalised.

"Sides do it all the time, they come here and cheat and push the boundaries but the referees don't deal with it and it made it close.

"This season the decisions of referees have affected results of games and today was no different.

"In the wet conditions to be so dominant and where it gets to the point where they're so bad and cheating so much that the referee loses his bottle and reverts to guessing it's not good enough and I don't think 24,000 people should accept it."

"To be able to come here and not play particularly well but compete to the end is encouraging.

"The set piece wasn't as good as it should have been, our exiting of the positions wasn't great and they put a lot of pressure on us.

"I thought the conditions probably suited them rather more than us and the way we want to play.

"Our scrum has been a big part of our season so far, so we're disappointed to come second best here today.

"We're a side in transition and a side with a lot of room for improvement but I think we're already seeing glimpses of how good this team can be."