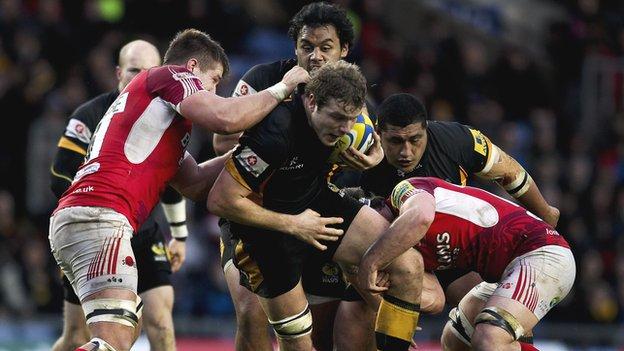 Wasps recorded their first Premiership win on the road in more than a year as they ran in four second-half tries to sink London Welsh.

Gordon Ross kicked four penalties for the hosts before the break, with Nick Robinson responding twice.

Scores by Elliot Daly and Will Taylor ensured Welsh would take nothing from the game before Tom Varndell's extra-time try gave Wasps the bonus point.

Wasps' last away win in the league came back in October 2011 in a wretched season that only just saw them escape relegation from the top flight.

But their five-point win takes them to 33 points for the season and equals their total points haul from last term - a mark of their progress since September.

The visitors could have been comfortably in front at the break but for some misfiring goal kicking.

Daly missed a long-range shot before a powerful scrum and an offside against Wasps saw Ross make it 6-0.

Robinson levelled with a brace of his own but then was off target with two more attempts.

Welsh's dominant front row gave them the platform from which Ross secured another two goals for a 12-6 interval lead.

After Robinson pulled back three points came Simpson's individual try that few other scrum-halves could reproduce.

Taking the ball from a line-out 30m out, he went through a gap and surged to the corner breezing through three tackles before touching down.

The Exiles were still in with a shout of winning until, with 13 minutes remaining, good work from Ashley Johnson saw the ball spread wide to Daly who, despite being tackled in scoring, slid over to make it a 10-point advantage.

A poor Exiles line-out saw Billy Vunipola pounce on the loose ball before he hacked on, re-gathered and offloaded to Marco Wentzel who fed inside to substitute prop Taylor.

Jones landed the conversion before the grandstand finish that saw Vardnell over on 83 minutes after more sublime offloading by Wasps.

"We were quite buoyed at half-time and turning around at 12-6 up we knew the first score after that was going to be important.

"Nicky Robinson put one over (penalty) and then they squirted over for the first try.

"We came back and got within bonus point area but individual errors cost us again as some boys learnt to step up to Premiership level."

"The big two messages at half-time was I asked them to be accurate in both attack and defence and muscle up.

"I felt that if we could do that, then we had the X Factor in our team and the added quality that would win us the game.

"But that quality can only win you the game if you underpin it with accuracy and work ethic.

"It was an honest appraisal of where we were in the first half (at the interval). It was not kicking over of glasses or anything because that doesn't get you anywhere.

"It was certainly that everyone knew that you cannot come here expecting it to happen - you have to make it happen.

"Welsh were right in that game even at 22-15 and, obviously, a fantastic try for Joe and also for Elliot."