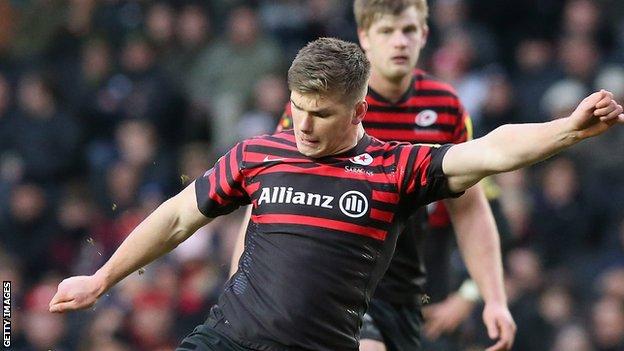 Saracens went second in the Premiership table with a narrow victory over Northampton Saints at Stadium MK.

Sarries started strongly and were 11-0 up after 15 minutes through a try from hooker John Smit and two penalties from Charlie Hodgson.

Saints replied with a converted Phil Dowson try and a Stephen Myler penalty and they took the lead after the break with two more penalties from Myler.

Owen Farrell came off the bench to put Sarries ahead and they held on to win.

However the result could have been reversed had Stephen Myler not missed a last-minute penalty from long range.

The Northampton fly-half saw an effort from just inside his own half bounce off the crossbar.

Saracens had brought Ernst Joubert back into the starting line-up as captain for the rested Steve Borthwick, while England centre Brad Barritt and scrum-half Neil de Kock also started.

Stadium MK became the sixth different 'home' venue for Saracens this term and the home side were on top from the kick-off.

With six minutes played a smart grubber kick from Hodgson was chased down by winger Chris Ashton and the Northampton defence were forced to concede a line-out.

A catch and drive effort from the forwards propelled former South Africa captain Smit over the line.

Hodgson missed the conversion but scored two penalties shortly afterwards to put Sarries in control of the game.

However midway through the half the tide turned and Northampton had a try of their own.

Phil Dowson was fed a short pass by scrum-half Lee Dickson and burst through the defence to round off a team move which had been started by winger Ken Pisi.

Myler converted the try and Saints went into half-time ahead when Myler added a penalty.

The game remained a close affair in the second half.

Northampton conceded three penalties in the opening 10 minutes but Hodgson missed them all, allowing Myler to put Saints ahead for the first time in the game and then stretch the lead.

England international Farrell came off the bench to take over kicking duties from Hodgson and scored two straightforward penalties which gave Sarries a 17-16 lead with little under a quarter of an hour remaining.

Northampton then had a chance to win it with Myler's last-gasp effort, but the kick fell just short of securing a dramatic victory.

Saracens have now taken 24 points from their last seven games and are one point behind league leaders Harlequins.

Northampton pick up a losing bonus point from the match and remain sixth in the table.

"It was a pretty tough kick and fair play to Stephen Myler. He struck the ball beautifully and we are fortunate it didn't go over.

"It seemed to be on the edge of his range and that proved to be the case.

"We felt we had the better of things for a lot of the match but you've got to reflect that on the scoreboard, which we didn't do.

"We never felt they had us under a lot of pressure but every time they came into our half they came away with something.

"There were some glimpses of us playing good rugby. We had enough at the end."

"It was two competitive teams and Saracens have that ability to win tight games.

"In the final 10 to 15 minutes, there was some decision making by us we'll need to look at and a couple of the refereeing decisions as well.

"We know that we haven't played as well as we'd have liked in every game. There's not a lot between the top sides and although we're mid-table, we're not out of the running.

"There'll be a few people who've already written us off and we quite like that. It's a long way to go."