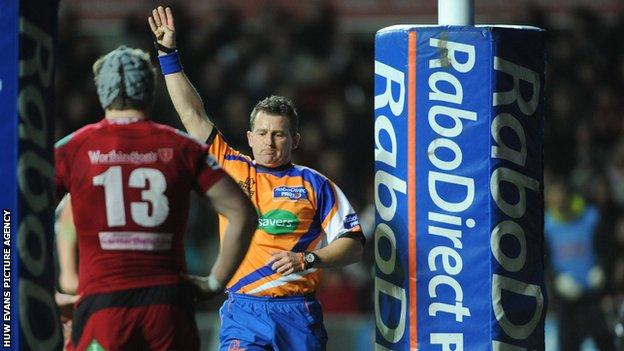 Scarlets coach Simon Easterby says he will review a video of the two red cards issued to his players during their 32-3 defeat at the Ospreys.

"I wouldn't like to comment too much now because I would end up getting into trouble... if I did," said Easterby.

"We will have to look back at them."

The Scarlets, who are still second on the Pro12 despite the defeat to the Ospreys, suffered only their fourth loss of the season in front of a 19,744 crowd in the Boxing Day derby.

Easterby admitted his team were second best to a Ospreys side flying high after their victory over Toulouse in the Pool stages of the Heineken Cup.

"We were second best in the first half, in particular, and their 19-3 lead meant a struggle to get back into the game," said Easterby.

"We were second best in most areas and in particular the scrum in the first half.

"In the second half, we had to chase the game and they got some positive decisions and we didn't."

Easterby refused to blame fixture schedule which saw the Scarlets have only have four days between their 9-6 victory over the Cardiff Blues at the Arms Park and the west Wales derby against the Ospreys.

"I don't think that should have any bearing, we just weren't good enough in the first half and then we had some inconsistencies in the second half in some of the decisions," said Easterby.

"Unfortunately that is the difference."