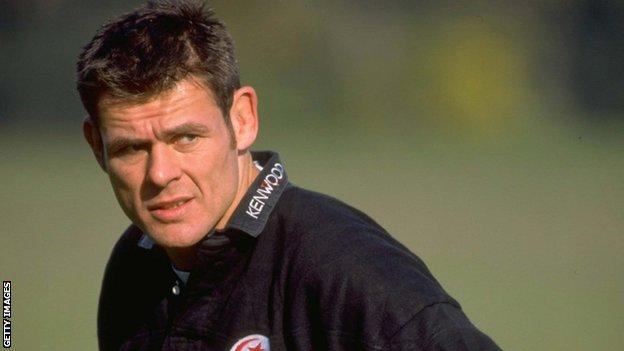 The former lock played for the Scarlets, Saracens and London Welsh and was Harlequins Managing Director and London Wasps chief executive.

He replaces managing director John Taylor and starts his new job on 1 January.

"It is a real privilege and extremely exciting to be asked to help lead this challenge," said Copsey.

"There is no doubt that London Welsh is currently on a very exciting journey which also means they face probably one of the biggest challenges currently in the sport.

Copsey's appointment is part of London Welsh's bid to build a long term future and plans to stay in English rugby's Aviva Premiership.

The former Wales lock played 10 seasons for the Scarlets and will link up with former Llanelli teammate Lyn Jones, who is now coach of London Welsh.

Copsey brings a wealth of experience in running professional rugby clubs, having been managing director at Harlequins between 2000 and 2007 and chief executive at London Wasps for two and a half years.

"As many people know, London Welsh has a wonderful rugby history and heritage," said Copsey.

"There is no doubt that London Welsh is currently on a very exciting journey which also means they face probably one of the biggest challenges currently in the sport.

"I am very much looking forward to working with my old team-mate Lyn Jones, the chairman Bleddyn Phillips, together with John Taylor, Steve Lewis and all the players and staff."

The club confirmed Taylor has been given a new role as vice-chairman and ambassador.

London Welsh moved to the Kassam Stadium after being promoted to the Premiership and claim to attract crowds of between 4,500 and 5,000 at their new home.

Copsey's appointment is seen as pivotal to the Exiles' vision to build London Welsh into a viable and sustainable Premiership outfit.

London Welsh have already started a community rugby programme, are looking for new training facilities and want to begin a rugby academy programme in Oxford.

The Exiles are also looking for new investors to help businessman Kelvin Bryon, who kept the club afloat before promotion to the Premiership.