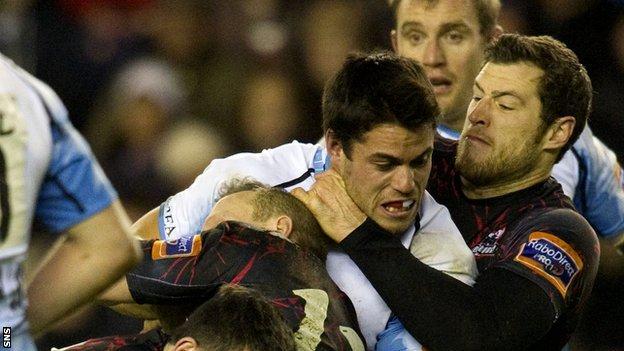 Glasgow won the 1872 Cup for a fourth successive year after an entertaining derby with Edinburgh at Murrayfield.

The Warriors had won the first leg 23-14 at Scotstoun Stadium on 21 December.

An early try from New Zealander Sean Maitland put the visitors in the driving seat with Ruaridh Jackson adding to the score before half-time.

Henry Pyrgos added another try for Glasgow in the second half, with Roddy Grant and Tim Visser scoring late tries for Edinburgh.

The home side started assertively, but, after giving away a penalty, Glasgow picked and drove and Jackson found Maitland who went over.

Peter Horne put his conversion attempt well wide, however, and a Laidlaw penalty got Edinburgh off the mark before Horne was sin-binned.

Edinburgh tried to make the extra man count, but a gritty Glasgow defence kept surging runs from Grant and Netani Talei at bay.

Quick thinking from Pyrgos sent Horne, back on the pitch, free, but a tackle 15m from the try line saved Edinburgh.

Laidlaw tried to build a similar move, but Piers Francis was not alert to danger when he passed on and Jackson intercepted and ran 45m to go over in the corner.

Dougie Hall went over after another surging Warriors break, but referee Neil Paterson signalled a penalty to Edinburgh for obstruction.

Glasgow were causing Edinburgh all sorts of problem, and DTH van der Merwe evaded a weak Dougie Fife tackle but chip-kicked when he should have kept ball in hand and Visser cleared to touch.

Horne finally put the ball between the posts with two penalties as half-time approached to put Warriors 13 points clear.

Edinburgh were looking to get off to a good start to the second period, but almost found themselves another try down when van der Merwe was adjudged to have been out of play when he went over in the corner.

Glasgow almost increased their advantage when they won a penalty after the influential Rob Harley intercepted an Edinburgh line-out.

The visitors elected to scrum, having had the advantage in that area, but Talei turned over from Ryan Wilson's break.

The hosts gained some territorial pressure, but were almost caught on the break by Maitland, but Sean Lamont failed to pass at the key moment and the chance was lost.

Allan Jacobsen was then yellow-carded for having hands in the ruck and Pyrgos took advantage, breaking from behind the scrum and just diving on to the line, with Horne failing to convert for a third time.

Edinburgh took off the ineffectual Francis, bringing on Richie Rees with Laidlaw moving to number 10, and, almost immediately, Laidlaw's chip-kick was collected by Matt Scott, with Grant ending the move under the posts.

Van der Merwe outmuscled three tackles to take the ball almost to the line only to see Hogg fumble the ball as Warriors sparked back into life.

With the minutes running down Edinburgh finally found some urgency, and, after a prolonged period of pressure, Visser charged over under the posts to set up a thrilling last few minutes.

The thin white line of Glasgow defence stood firm, however, and Gregor Townsend's men retained both trophy and bragging rights.