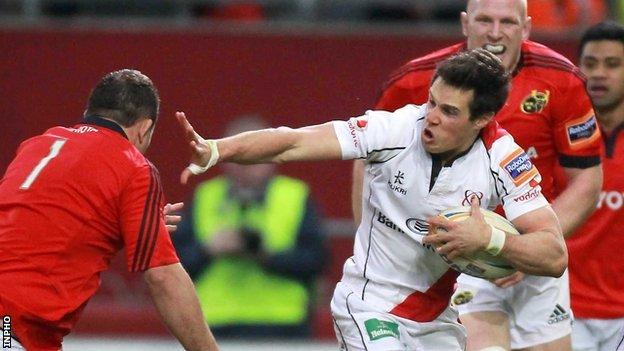 Pro12 leaders Ulster have made 11 changes for the clash with Irish rivals Munster at Thomond Park.

Craig Gilroy, Luke Marshall, Neil McComb and Robbie Diack retain their places with many players rested or involved in an Ireland training camp.

Adam D'Arcy will make his first start of the season at full-back.

Irish internationals Peter O'Mahony, Conor Murray and Simon Zebo return to the Munster team while Damian Varley is back after injury.

Ronan O'Gara is named on the bench with Ian Keatley retaining the number 10 jersey.

O'Gara and Stringer will be joined on the replacements bench by Felix Jones, who returns after injury.

Donncha O'Callaghan and Billy Holland are the only combination up front who remain intact for a game that sees Denis Hurley win his 100th Munster cap.

Ulster are able to field an all Irish-qualified match-day squad for the trip to Limerick.

D'Arcy will be joined in the back three by speedy youngsters Chris Cochrane and Gilroy.

Roger Wilson will captain the team from number 8 and he will be ably assisted in the back row by Mike McComish and Diack.

There are opportunities on the bench for Academy players Ali Birch, Stuart Olding, Ricky Andrew and Alan O'Connor, who made his debut against his home province Leinster last weekend.

Experienced prop Tom Court, who enjoyed a fine man-of-the-match performance against Leinster weekend, is also among the replacements.