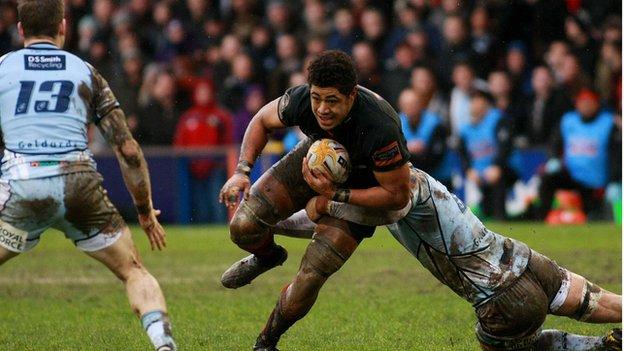 Toby Faletau has been described as "genuinely world-class" ahead of Newport Gwent Dragons's New Year's Eve derby with the Ospreys.

The Wales number eight won the man-of-the-match award as his Dragons side lost to Cardiff Blues on Boxing Day.

"Those sort of things are bandied around quite generously but I don't think it is with him."

Faletau, who played for Wales in all four games in the recent Autumn Test series, returned to action for the Dragons at the Arms Park on Boxing Day.

The 22-year-old has become a mainstay of the Wales side and was part of the sides which reached the 2011 World Cup semi-final and won the Six Nations Grand Slam in 2012.

The Tongan-born player is under contract at the Dragons until the summer of 2014 but the region fear he will soon become a target for Europe's biggest and richest clubs.

Humphreys has identified Faletau, who scored a superb solo try against the Ospreys in 2010, as the Dragons's danger man but admits the Pro12 champions do not intend to man-mark him.

"I don't think you can," said Humphreys.

"If you double-mark him you are compromised elsewhere. I remember him going from his own 22 metre to our 22 last year on a simple missed tackle.

"He is a genuinely world-class player. He has to be treated as such but we have players who should do what they are supposed to do and so hopefully he won't get another man-of-the-match award."