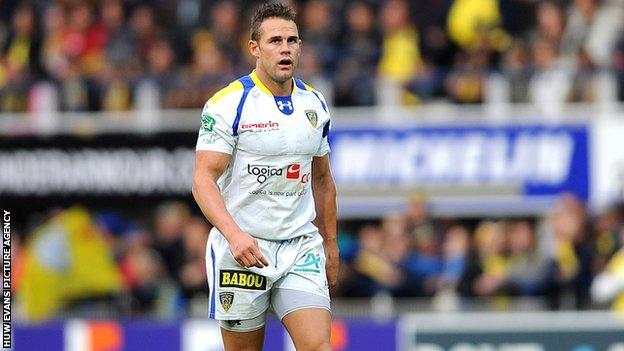 Full-back Lee Byrne says he has to earn a Wales recall before he even thinks about a British and Irish Lions place.

Lions legend Gavin Hasting has declared Welshman Byrne would be his Test full-back for Australia 2013.

Byrne, who has been sidelined with a fractured vertebrae, is expected to return for Clermont Auvergne against Exeter on 12 January.

"My first job is to try and get back into the national team and see what happens from there really," said Byrne.

The former Ospreys and Scarlets full-back was the in-form full-back in Europe before he cracked a vertebrae in his lower back against Leinster in the Heineken Cup on 15 December.

The 2005 and 2008 Grand Slam-winner and 2009 Lions tourist to South Africa still has Wales ambitions but has seen Cardiff Blue Leigh Halfpenny, the incumbent Wales full-back, and Liam Williams of the Scarlets overtake him in the Wales pecking order.

"I just have to concentrate on my own form," said Byrne.

"My first job is to try and get back into the national team and see what happens from there really.

"I just want to carry on the form I had before the injury and make people stand up and take notice really."

Byrne talked to the Welsh coaching team before the Autumn Test series but hasn't heard anything since. He admits he is honoured at being singled out by Hasting for praise but he is determined to "let my rugby do the talking".

He admits the prospect of a second Lions tour is on the mind of every British and Irish rugby player.

"I went with the Lions in 2009 and if there was a even a chance of selection I would jump at it," said Byrne.

"It's a player's dream and it's all about putting the performance in in the Heineken Cup. Every player has it in their mind now and if they said they didn't they would be lying.

"From the beginning of the season, everyone's goal was the Lions tour. As a player you strive for the top and you cannot go any further than a Lions Test place."