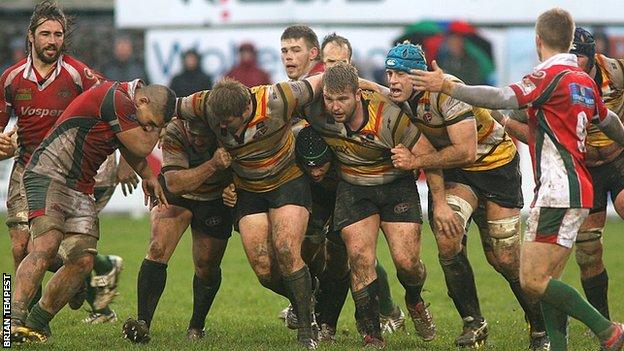 The Pirates, who currently lie sixth in the Championship table, take on fourth-placed Bristol at the Mennaye on New Year's Day.

"They've spent a lot of money and maybe they should be doing better then they are," Davies told BBC Radio Cornwall.

"We're hoping for a big crowd and a big atmosphere as it's normally a cracking game between Bristol and the Pirates."

Davies added: "They learned their lesson last year, all that matters is the play-off semi-finals and final.

last season in the first leg of the semi-final play-off, effectively

A change to the Championship format this season means only the top four sides compete in the play-offs as opposed to eight in previous years.

"They can always say they're gearing up for that," Davies continued. "But in reality maybe they're not achieving what they should be.

"If we win it puts us in a stronger position to push for that top-four finish.

"But if Bristol turn us over then they're in the stronger position and I think that's why to make him available for this game, because they know the importance of this fixture."

but the Cornishmen have only

"They are two good teams for the rugby purists, so hopefully the crowd will come and get entertained."