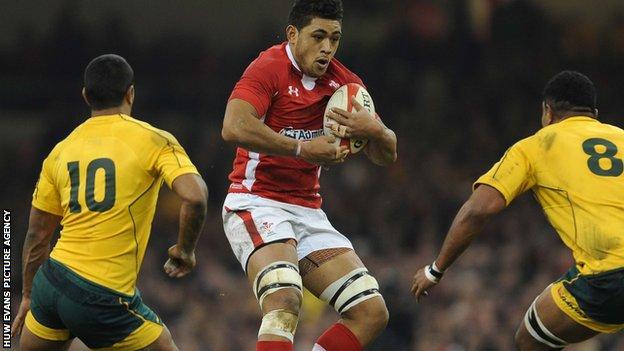 Former Wales captain Michael Owen says Newport Gwent Dragons would be better off if they sold Toby Faletau ahead of his "inevitable" departure when his contract expires in 2014.

Wales number eight Faletau has been linked with a move away from Wales to Bath in the Aviva Premiership.

"I think it's better to lose him now and get a fee for him," said Owen.

And ex-Dragon Owen says all Wales' regions should consider a similar approach with the game's star players.

Faletau's fellow Wales back-row star Dan Lydiate is expected to join a French club at the end of the 2012-13 season following the announcement that he will not be staying at Rodney Parade.

And as the player-drain to away from Wales shows no signs of abating, 2005 British and Irish Lion Owen says the Dragons should be joined by Cardiff Blues, the Ospreys and Scarlets in a fresh approach to the issue.

"The Welsh regions might want to start to tie up these young players on long term contracts and have a get-out clause so when the French and English clubs come calling the Welsh regions get some money back for the investment they have made in developing the player," he said.

"It is a massive blow for the Dragons but it was inevitable that Toby Faletau was going to leave," said Owen.

I think it's better to lose him now and get a fee for him rather than lose him at the end of his contract and not get any money as they did with Dan Lydiate.

"[Especially ] When you look at the way the Dragons have been going, with Dan Lydiate leaving.

"I think it's better to lose him now and get a fee for him rather than lose him at the end of his contract and not get any money as they did with Dan Lydiate."

Faletau, who has won 21 Wales caps, is under contract with the Dragons until the end of 2014.

But the South Wales Evening Post has reported that Bath have already offered a six-figure transfer fee to release him from his contract now.

The 22-year-old has become a mainstay for Wales and was part of the side which reached the 2011 world cup semi-final and won the 2012 Six Nations Grand Slam.

Owen believes the Dragons should cash in and make some money from a transfer fee if Faletau does decide to leave Wales.

Welsh rugby has seen some of its biggest names already head to play for the big-spending clubs in French rugby's Top 14.

Lydiate, who is sidelined by an ankle injury, and Cardiff Blues centre Jamie Roberts are tipped to sign for Racing Metro in Paris in the summer.

"All the regions are losing their star names, but on the other hand it is a massive compliment," said Owen.

"The fact that all these clubs with massive budgets and ultimately the strongest clubs in Europe want to purchase Welsh players - it's a massive compliment on the work that has been done within Welsh rugby."