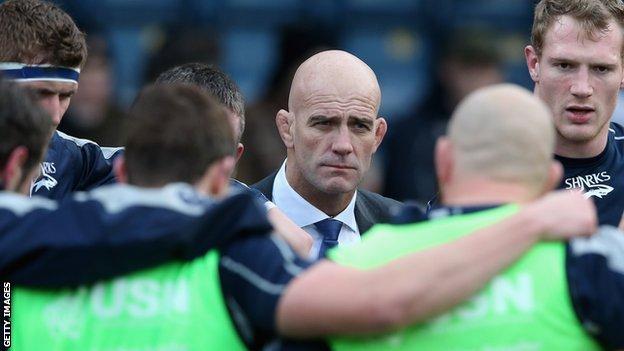 John Mitchell has quit as Sale Sharks coach to return to South Africa.

The 48-year-old former All Blacks coach had only been in charge of the team for one month after taking over until the end of the season.

A statement released by Sale's co-owner Brian Kennedy said Mitchell had left the Premiership club for "personal reasons which we respect".

Sale are bottom of the Premiership table, one point off London Irish, after securing their second win of the competition against Worcester on Friday.

Mitchell, who had a spell as player-coach with the Sharks during the late 1990s, had previously been helping the club on a part-time consultancy basis.

The club statement reads: "John was brought in on a consultancy basis with a view to the possibility of being employed in a longer term position within Sale Sharks.

"He has had to return to South Africa for personal reasons which we respect.

"We are grateful for his valuable and insightful contributions albeit for a shorter term than envisaged.

"Steve Diamond, Bryan Redpath and Pete Anglesea will continue to coach the side, implementing many of John's ideas, and building on last night's excellent performance."

Mitchell left his position as head coach of South African side Golden Lions in November, after being cleared of misconduct charges by the club.

He was officially named in charge of first-team affairs at the City of Salford Stadium shortly after and oversaw five Sharks fixtures - including a 62-0 demolition by Toulon in the Heineken Cup earlier this month.

But his penultimate game in charge saw Sale salvage a point against Wasps last weekend before beating Worcester - just their fourth victory in all competitions this season.

Mitchell's departure is the latest twist in off-field dramas at Sale this term after Redpath was removed from his position as director of rugby in October after overseeing their worst ever start to a Premiership season.

Chief executive Diamond then installed himself in charge of the first team, with Redpath demoted to backs coach, whilst he waited for Mitchell to resolve his dispute with the Lions.

While Mitchell's future in England was never intended to be long-term because he has an established family life back in South Africa, the brief nature of his tenure has come as a surprise.