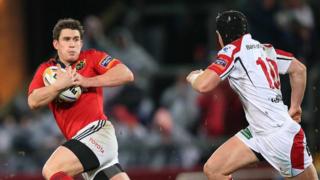 Pro12 leaders Ulster lose their unbeaten record in the league after a defeat by Irish rivals Munster at Thomond Park.

An inexperienced Ulster team trailed 10-3 at the break with Munster's dominance up front earning them a penalty try after 33 minutes.