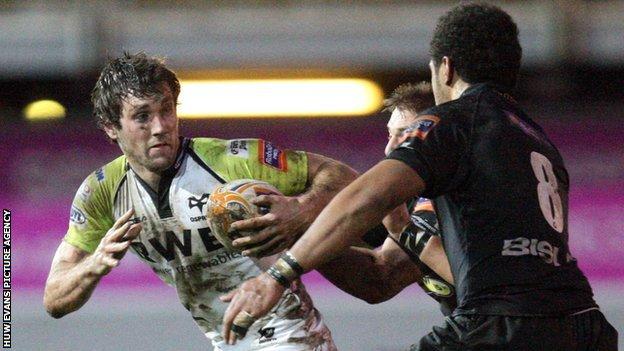 Tries from Eli Walker and Ashley Beck earned the Ospreys only their second win at Rodney Parade over Newport Gwent Dragons.

Wing Walker squeezed in at the corner after three minutes while Beck went over late on following a charge down.

But Dan Biggar converted both Ospreys tries as they rose a place from sixth to fifth in the Pro12 table.

The tactics worked as the Dragons held back in defence while the Ospreys shipped the ball left to free Walker for the opening try in the third minute.

Biggar converted what the Ospreys hoped would be a good starting omen.

But the home side battled hard to ensure their star-studded opponents remained at bay for the remainder of the opening period, but remain 11th in the table above winless Zebre.

With Adam Jones restored to the starting line-up at tight-head in an all-Wales front-row alongside Richard Hibbard and Ryan Bevington, the Ospreys were expected to dominate up front.

But the Dragons trio of Phil Price, Sam Parry and Dan Way held their own amid a tenacious home performance.

Even so, the Ospreys' ignored the success of their early tactics, giving the Dragons the breathing space to build confidence and execute their game plan to good effect.

Number eight Toby Faletau again underlined the qualities that have led to speculation over his Dragons future.

And with back-row colleague and Dragons skipper Lewis Evans also impressing in the breakdown battle, the Ospreys were made to work hard for the win.

The visitors also stuck to their guns with blindside flanker Ryan Jones earning the man-of-the-match award for his display.

Erstwhile Wales captain Jones was in the vanguard as the Ospreys enjoyed territorial advantage.

But with Darren Edwards' side earning a penalty from Prydie, the contest was finely balanced until the final quarter.

The pressure on the home side finally told as Biggar charged down opposite number Lewis Robling before Beck pounced to gather and score.

Biggar again converted and the Ospreys held on to win.