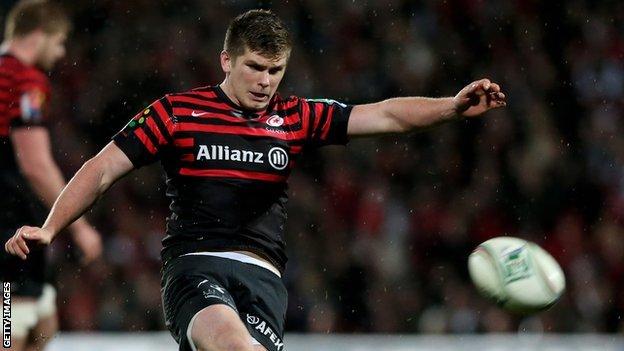 The 21-year-old came off the bench to play at outside centre in Sunday's narrow scoring two penalties.

Farrell or Flood for fly-half?

"Owen will play some rugby at 10 over the next two or three weeks," McCall told BBC Radio 5 live.

"He'll get plenty of rugby there to make sure he's in good form for England when the Six Nations begins."

England head coach Stuart Lancaster favoured Leicester's Toby Flood as his starting number 10 for the defeats by Australia and South Africa this autumn.

But Farrell was handed the fly-half berth for the historic kicking 17 points.

And the 12-cap back has until 2 February to persuade Lancaster he should start England's Six Nations opener against Scotland - the same fixture in which he made his international debut last year.

"Owen is very aware of the plan we have over the next three weeks - and has been since he came back from England's autumn internationals - about when he will play 10 and when he won't," said McCall. "He is very happy with that plan."

Farrell's six points from the boot against Saints proved vital to the result, with Saracens leading by 11 points in the early stages but holding on to go second in the Premiership.

"You've got to look back across the whole 80 minutes and if you haven't reflected your dominance on the scoreboard that's obviously a problem," said director of rugby McCall. "And the game was tight because of that.

"But there are signs of us developing nicely. The players are confident, our game is in good order and it's another very good win."