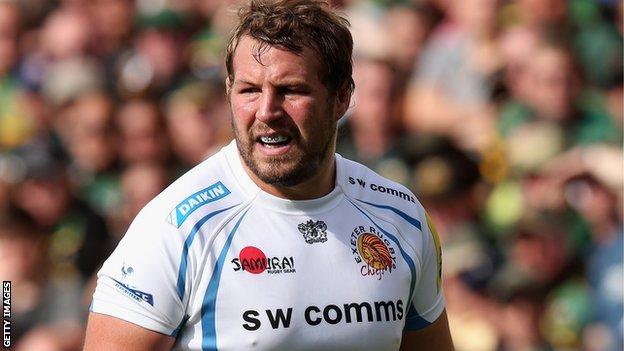 Exeter Chiefs will be without prop Brett Sturgess for up to three months after the 31-year-old broke his arm.

Sturgess, who broke his other arm last season, has had surgery after being hurt in the

"It's a similar injury to the one he suffered last time," said Exeter head coach Rob Baxter.

Sturgess and has been the first choice loose-head for much of the season.

"It's unfortunate for Sturge because the season has been going well for him, but at the same time it's an opportunity for someone else," Baxter said.

"Ben Moon went on and did well, Carl Rimmer came to us originally as a loose-head so there's an opportunity there for him to get some more time in his preferred position.

"Luke Cowan-Dickie is playing very well down at Plymouth at loose-head so we've got options.

"We do feel we've got a strong squad here so at times like this the guys have got to stand up and come in and do a good job for us."