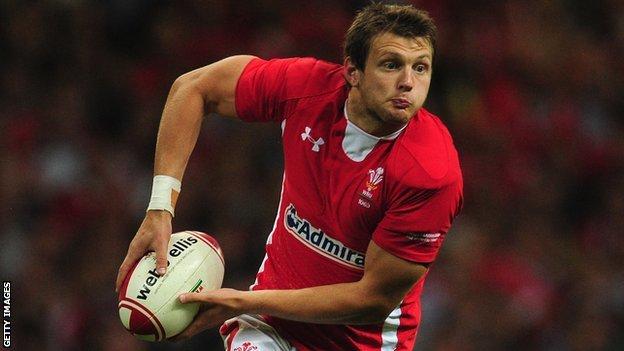 Dan Biggar remains hopeful of starting as fly-half for Wales when they begin their Six Nations campaign against Ireland in Cardiff on 2 February.

An Achilles injury has ruled Rhys Priestland out of the campaign.

"It would be a great honour if I could get that [Wales] shirt but there's a lot of hard work and a lot of people who are playing well," Biggar said.

"It's certainly not up to me, all I'm going to do is keep continuing to play as well as I possibly can and keep knocking the door.

"That's all I can do and it's totally up to the selectors if they go with that.

Biggar has been in great form for Ospreys this season and impressive recent victories over in the Heineken Cup and against and in the Pro12 have advanced his Wales claims.

But the 23-year-old has often been overlooked by the selectors and has played just twice for Wales this year.

Biggar was selected for the Barbarians game last June but then left out of the following tour to Australia, then returned against Samoa in the November Tests before being injured early in that game.

The fly-half's Ospreys team-mate Ashley Beck is a doubt for the Six Nations after the centre injured an ankle in the New Year's Eve win at Rodney Parade.

However, Wales are well served at centre with Jamie Roberts - although the Blues and Lions player is currently sidelined - Jon Davies and Scott Williams all vying for places.

Perpignan lock Luke Charteris and Ospreys prop Aaron Jarvis are both ruled out of the Six Nations with knee injuries.

However, there is better news on Dragons flanker Dan Lydiate, who is understood to be progressing well following a broken ankle and there is hope he will figure in the campaign.