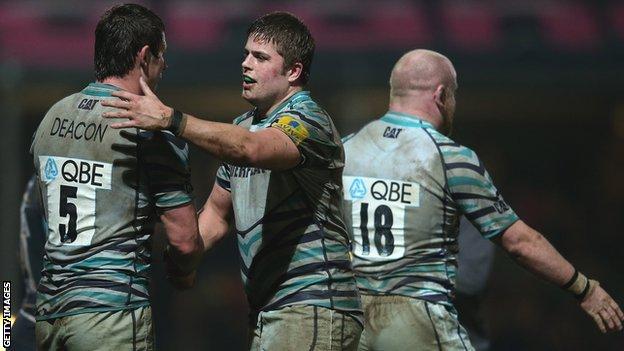 Leicester scored a last-minute penalty try as they came from behind to beat Worcester 19-14 at Sixways, to go top of the Premiership table.

David Lemi's try and three Andy Goode penalties gave the Warriors a 14-point lead, before Scott Hamilton went over to close the gap to 14-5 at half-time.

And Leicester's second penalty try put them ahead in the last minute, Flood adding the extra two points.

It was the third time that Worcester had been denied victory in the last minute at Sixways this season, after their first-day defeat by Bath followed by the draw with Gloucester.

The Tigers welcomed back Tom Croft for the first time since he injured his neck against Harlequins back in April, and the flanker lasted 50 minutes on his return to action.

Goode's fifth-minute penalty gave the hosts the lead and this was soon followed by the game's first try.

The visitors paid the price for a lacklustre start with Lemi going over after a free-flowing move, although Goode missed the conversion before kicking his second penalty to stretch Worcester's lead to 11-0.

Martin Castrogiovanni was sin-binned for an illegal tackle to reduce Leicester to 14 and Goode added another penalty to put the Warriors in complete control.

Leicester never had a spell of sustained pressure in the first half until the period drew to a close.

Flood missed his first penalty of the night but moments later Dan Bowden's clever pass sent Hamilton over in the right-hand corner.

The conversion was missed by Flood, who then kicked a penalty shortly after Goode was yellow-carded.

With Goode sitting out, Chris Pennell missed two chances to stretch Worcester's nine-point half-time, as one penalty came back off the post and the second fell short.

After intense pressure the Tigers were awarded a penalty try after Worcester collapsed a scrum. This was converted by Flood to close the gap to two points.

Just as it looked as though it would not be Leicester's night, they turned the game around in the last minute.

The Warriors' scrum capitulated and Leicester were awarded their second penalty try to put them ahead for the first time.

Flood added the conversion as Tigers stretched their winning run to six matches in all competitions.

"I can't wave a magic wand, unfortunately, and suddenly our penalty count goes below 10 a game and we get no yellow cards.

"If we are still repeating the same offences in four to six weeks' time, then I have got to get the big stick out.

"We are being penalised, and we have just got to cut it out. It will be a hard-line approach to it. I've done the softly, softly."

"Worcester played exceptionally well. We were outplayed in the first half.

"The try just before half-time really picked us up, but if Worcester had won tonight I don't think we could have had any complaints.

"We kept our composure after half-time, and luck was on our side in some ways. We needed to chase the game to try to win, and the effort from our lads to play for 80 minutes was massive."