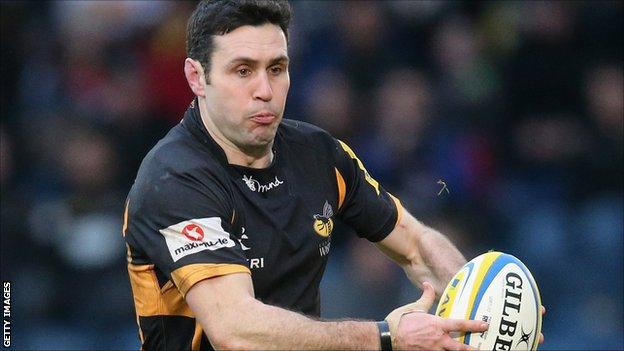 The hosts narrowly led 16-12 at the break with Christian Wade scoring for Wasps after Nick Abendanon and Michael Claassens had crossed for Bath.

But Wasps ran away with it in the second period and Chris Bell's try was converted by Nick Robinson.

Tom Heathcote's penalty was all Bath could muster after the break.

Wasps led at half-time thanks to Wade's sixth Premiership try of the season which Jones converted - to add to his three earlier penalties.

Bath had been in control up until that point with Abendanon's first-minute try in the corner and a further effort from Claassens, who bundled over in the corner, with Donald sending over a sole conversion.

Before that try the game, already brimming from a pulsating start, erupted when Wasps wing Tom Varndell was sin-binned for an alleged spear tackle on Horacio Agulla, while Bath later had Dom Day yellow carded for bringing down James Cannon in the air.

Heathcote reduced the deficit to one with a penalty shortly after the break but Jones pushed Wasps further in front with two penalties to take his tally for the afternoon up to 17.

And Wasps made sure of the victory with Bell's try, after a neat offload from Joe Simpson, seven minute from time, which Robinson converted sealing the win, with Abendanon's sin-binning for a trip ending his afternoon on a sour note.

The result moves Wasps above Northampton into fourth while Bath are eighth.

London Wasps forward James Haskell: "It's exciting [that we're in the top four], but the good thing is that our feet will be firmly back on the floor [next week].

"We are pleased as a team but we know there's a lot of work to do. There's a long way to go.

"We've got a new team with a lot of young talent, with great new signings like Ashley Johnson. In the Premiership slow and steady wins the race and we've just got to keep going and look at our games and keep on improving.

"I think belief comes from doing a lot of hard work, sometimes in our review meetings you're not sure if you have won the game given the amount of scrutiny we are put under but everyone is working hard towards the same goal."

Bath head coach Gary Gold: "I think the table is quite tight this year. If you look at it, if you're a pessimist and see the glass half empty you could think [we're out of the top four contention].

"But we have a good group of rugby players, the attitude is right and I'm certainly not going to be giving up on the top four going forward.

"At 29-15 it doesn't look like we showed character but I think we did, we started off well and we put them under pressure, but that try just before half-time hurt us there's no doubt about it.

"I think we defended bravely for quite a number of phases at that stage and a piece of brilliance from their very good players led to them getting a try."