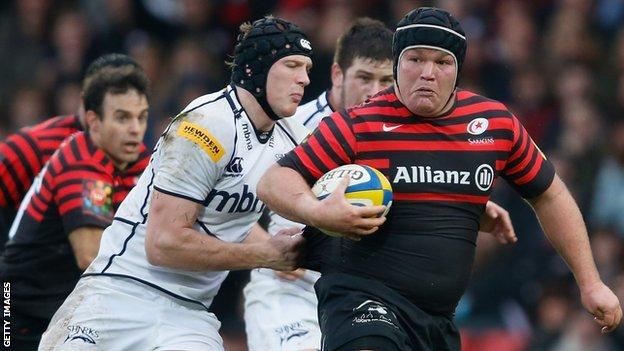 Saracens moved up to second in the Premiership as they came from behind to claim a convincing win against Sale.

The visitors took an early lead through two Danny Cipriani penalties before Owen Farrell kicked 15 points to put Saracens 15-6 ahead at half-time.

This game was Saracens last in the Premiership at Vicarage Road in Watford, the ground which had been their home since October 1997.

During that time they have won 113, drawn three and lost 43 of their 159 Premiership games there.

They will play one more match at the stadium, a Heineken Cup game against Edinburgh on 20 January, before moving to Allianz Park in North London.

But their hopes were dashed with late Saracens tries from David Strettle and Charlie Hodgson.

Bottom-placed Sale made a bright start as Cipriani kicked two penalties inside the first eight minutes, the second of which was from inside his own half, to put Sale 6-0 ahead.

But Saracens quickly took control of the game and capitalised on numerous mistakes from Sale as Farrell kicked four penalties inside a 10-minute spell to put his side 12-6 in front.

Farrell, who had been preferred to Hodgson at fly-half, was justifying his selection.

He maintained his perfect kicking record as he added a fifth successive penalty to extend Saracens' advantage to 15-6 after referee Tim Wigglesworth had warned Sale captain Sam Tuitupou about his side's poor discipline.

Saracens were playing their last home Premiership game at Vicarage Road before moving to Allianz Park in north London later this month and their supporters had plenty to cheer as their side held a nine-point lead at half-time.

Early in the second half, Saracens failed to roll away and then argued the decision as Wigglesworth moved the penalty 10 metres closer to the posts as Cipriani brought Sale back within six points.

But two minutes later Farrell scored his sixth penalty with his 47-metre kick taking the score to 18-9.

Sale created a good opportunity when James Gaskell had the ball 20 metres from the try-line but, with a two-man overlap, a poor pass saw the ball end up out of play and the chance was wasted.

Cipriani again scored a long-range penalty, with the ball hitting both posts before going over to make it 18-12.

But Sale's hopes of a victory ended when replacement Hodgson, who had been on the pitch for only 30 seconds, made an inside pass to Strettle, who ran in unopposed from 40 metres, with Farrell adding the conversion.

Hodgson then sealed the win when he touched down after Strettle's kick-through with Farrell again kicking the extra two points.

Saracens director of rugby Mark McCall: "David Strettle was made man-of-the-match today and he was magnificent.

"He's really relished this opportunity to play on the left wing and England don't have that many natural left wingers.

"No-one's been putting their hands up as an out-an-out starter and the last five weeks has seen some of the best rugby I've seen from him.

"We'd like to be scoring more tries and we've done that in certain games in Europe but we were dominant in the first half as well here and that is a good sign."

Sale director of rugby Steve Diamond: "We came down here looking for a performance and trying to stay with them for the first 60 minutes, which we managed to do.

"Then we conceded a soft try, really, once Charlie Hodgson came on that opened us up and then another basic error where they chipped through and scored.

"So we're disappointed with that, but for the first 60 minutes we were still in the game - if we could've just sorted our tackle awareness out in getting away from the ball we'd have been competitive.

"We've just got to stick to what we do in the league and hopefully our endeavour will show."