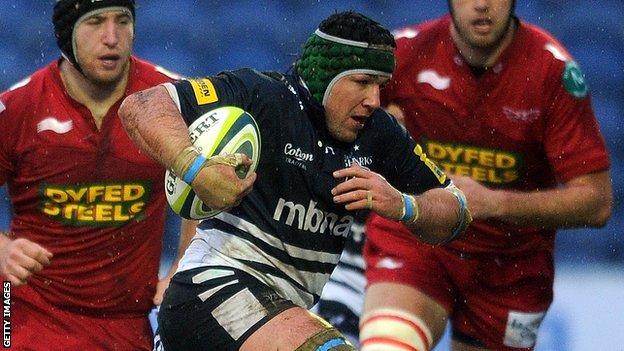 Sale's former England flanker Hendre Fourie has retired because of a shoulder injury, but the Sharks have strengthened their pack by signing New Zealand open-side Daniel Braid.

Fourie, who won eight England caps, made only three appearances for Sale.

The 33-year-old has been advised to quit on medical advice.

All Black flanker Braid, 31, joins Sale, currently bottom of the Premiership table, from Auckland Blues until the end of the season.

from his shoulder injury and he was dreaming of returning to the England set-up before being forced to admit his career was over.

He said: "I'm obviously very disappointed to have to end my playing career.

"I hoped to continue playing for a few more years and was determined to force my way back into the England set-up having been injured in our last warm-up game before the Rugby World Cup in 2011, but it wasn't to be.

"It's been a horrible 15 months barely being able to play for Sale and I tried so hard to come back.

"Even after the first two failed operations I hoped to return playing, but after the third operation I reluctantly had to accept medical advice that I should stop."

Sale director of rugby Steve Diamond said: "As a club, we have backed Hendre 100% in his battle to get fit. Unfortunately, his shoulder has not recovered.

"His body has been battered so much that the shoulder won't recover."

Open-side Braid, who has won four caps for his country, is a direct replacement for Fourie.

"He is a hard working flanker who tackles well and reads the game well too," said Diamond.

"He is an important signing for us and I am sure he will fit in perfectly."

Braid added: "It's great to get the opportunity to come to Europe, play a different style of rugby and live a different lifestyle.

"When I knew I was coming here, I went online and had a look at the squad and some of the names here such as Sam Tuitupou and Danny Cipriani.

"To see where Sale are in the table was a bit of a shock, but there are still quite a few games to go and with hopefully it's a case of onwards and upwards."