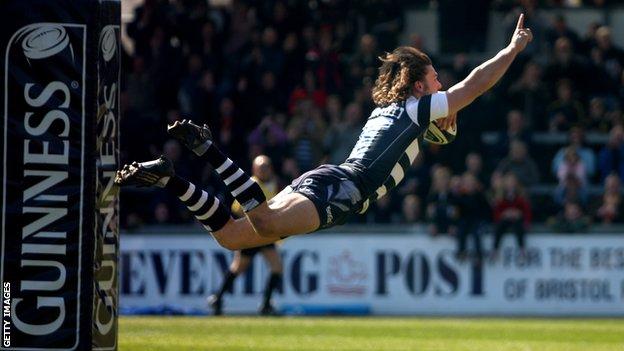 Bristol head coach Liam Middleton is confident he has a plan in place that will see a return to the Premiership.

The Memorial Ground side were relegated from the top flight in 2009 and despite twice finishing top of the Championship since, have failed in the play-offs.

"It's my overriding ambition, goal and dream to bring Premiership rugby to Bristol," he told BBC Radio Bristol.

"I think the structures and the foundations we've laid over the last 18 months will bring that success."

In their first season back in the Championship in 2009-10 under Paul Hull, Bristol ended the regular season with 19 wins from 22 games, but missed out on promotion to Exeter Chiefs.

The following year they finished a disappointing eighth and it was announced that Middleton would replace Hull for the start of 2011-12, where they again finished finished top but lost to Cornish Pirates in the semi-final of the play-offs, with London Welsh being promoted after an appeal.

"I don't really look at London Welsh and think 'that could be us,'" Middleton added.

"All we can do is make sure that we are the best club we can be now and keep our eye on the vision that we have.

"I think a lot of our planning goes into improving constantly and there is a real driven progression around the club."

Over the past two seasons the sides that have been promoted, Worcester and Exeter, both survived in their first year in the top division of English rugby and London Welsh are on course to continue that trend this season as they currently sit above Sale and London Irish.

Middleton believes it is just as important that he plans now for if Bristol get promoted, and the clubs that have gone up are useful examples.

"I think their [Exeter's] model is a good one," the Zimbabwean stated. "They were very patient where they came second a lot of times, but while coming second they didn't change their support or playing staff.

"That progression they had in the Championship for a number of years has continued in the Premiership and I believe what we're doing is not copying the Exeter model, but blazing our own pathway."