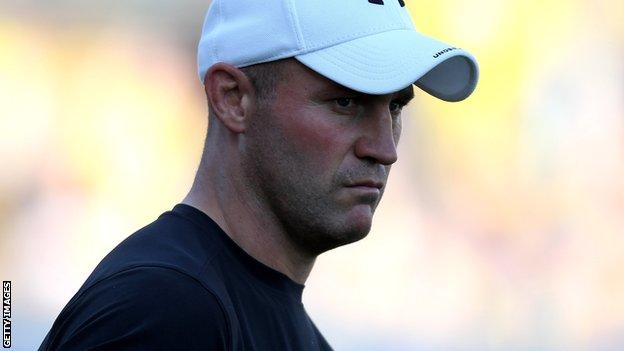 Northampton have appointed Clermont Auvernge assistant Alex King as their new backs coach for next season.

The 37-year-old former Wasps and England fly-half has helped the French side to top a Heineken Cup pool containing Leinster and Exeter, and to second place in the Top 14.

He was linked with a role with Stuart Lancaster's England squad last year.

It's the right time for me to come home to England and to a club like the Saints, which has a very bright future under Jim's leadership

The former Rosslyn Park player earned five England caps and scored a try on his debut against Argentina in 1997.

Having joined Clermont in 2007, he moved into the coaching position two years later. The French side were Top 14 winners in 2010 and they reached the Heineken Cup semi-final last season, where they narrowly lost to Leinster.

King said: "In Jim Mallinder, the Saints have a director of rugby that I respect greatly and a good, young team with plenty of talented English players.

"I always wanted to play in France and immerse myself in a different culture. I have done that and learned a great deal by working with great coaches like Vern Cotter, Joe Schmidt and Franck Azema.

"I'm certainly looking forward to working with Jim, Dorian West and the other coaches at the Saints and believe that it is the right fit for me professionally and personally.

"It's the right time for me to come home to England and to a club like the Saints, which has a very bright future under Jim's leadership."

Mallinder says the club were "inundated" with applications for the role of backs coach at Franklin's Gardens.

Alex King has plied his trade with champions from both sides of The Channel and this experience will have been a major factor behind Northampton's desire to sign him.

He was tipped to join Stuart Lancaster's coaching squad last summer but his duties in France clashed with England's tour of South Africa.

Next season he has the chance to help shape and revitalise Northampton.

"I believe that Alex is the right person to help us move forward as a group," he said.

"As a player, he was part of an excellent London Wasps team, and as a coach, he has helped Clermont Auvergne become one of the top clubs in Europe.

"He has built up a considerable amount of experience in a short space of time and is a coach who has some exciting ideas."

Saints academy manager Alan Dickens has held the role of backs coach since Paul Grayson left the club. Dickens will be staying at Franklin's Gardens in a combined role as Academy manager and as part of the first team coaching group.

Northampton Saints are sixth in the Premiership after five defeats in their last seven matches, and kept their slim chances of a Heineken Cup quarter-final alive with victory over Ulster at Ravenhill in December.