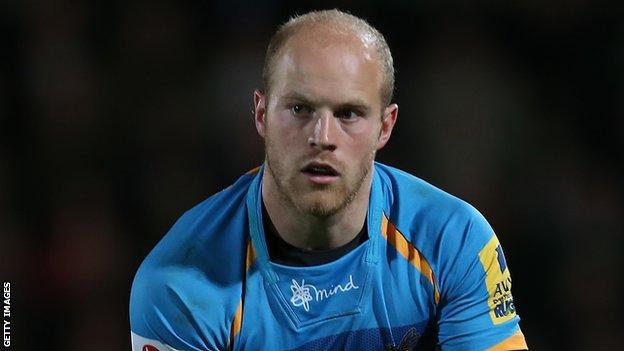 London Wasps scrum-half Joe Simpson hopes he will be able to break back into the England squad.

The 24-year-old made his sole Test appearance in 2011 and was named in the Saxons squad in the summer.

He told BBC London 94.9: "I am desperate to get back in the squad. I know there are quite a few strong scrum halves and a lot of competition.

"I know everything comes from club form. It is about me continuing to put in good performances."

He added: "I'm enjoying my rugby at the moment and am very pleased with my form.

"I know I have still got plenty of areas to work on and I am not shirking.

"I am out on the training pitch working as hard as I ever have been.

"It would be amazing if I could get the recognition and sneak back in the England squad.

"There is not much more than I can do than try to put my hand up on the pitch for Wasps and leave the rest down to the selectors."

Meanwhile Simpson, who came through the youth academy at Wasps, says the club are thriving on their success in the Premiership this season.

The side, who avoided relegation on the final day of last season, currently sit fifth in the table.

"We have players who are in the form of their life and young players who have really learned and gained experience from last season," the Australia-born player said.

"It is a far more enjoyable place when you are winning and people are happy. It is bringing the best out of people.

"We had the potential to do well last year but we were crippled with injuries throughout the whole season.

"It was a struggle but this year we have managed to keep our injury list down.

"Dai [Young, Wasps director of rugby] has got a larger squad and is able to rotate a bit.

"We are obviously disappointed with the games we have lost but at the moment we are happy with the form we are in."

Wasps are currently top of their pool in the Amlin Challenge Cup and remain in contention to qualify in the LV= Cup.

Simpson wants the side to capitalise on their position in the respective competitions in the second half of the season.

"We want to win silverware," he said.

"The Premiership would be top of everybody's list but we are happy with where we are sitting in the league and the pools we are in.

"We need to kick on and really take advantage of the position we are in and not let that slip.

"I believe on our day, we can beat anyone in the Premiership.

"We know our home form is far stronger than our away form. We still have a lot of strong teams to come to Adams Park and our home record is going to be tested.

"The league is so tight a win here or a loss there really shakes up the table.

"There is the ability to bounce into the top four or scrap for places at the bottom.

"We know we can't rest on our laurels. We need to push on and take advantage of the purple patch we have hit recently."