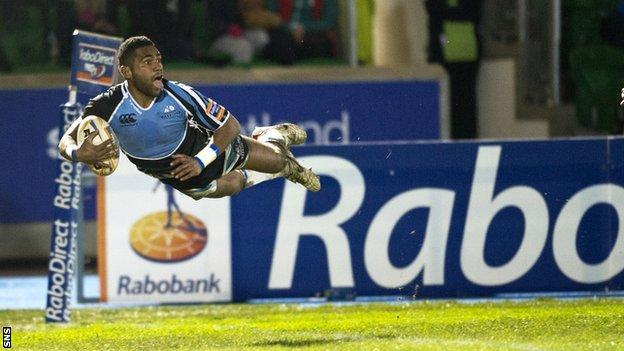 Gregor Townsend praised his Glasgow Warriors players after watching them at Scotstoun to move second in the Rabo Pro12 table.

"It was a real tricky game for us last night," Townsend told BBC Scotland.

"Having played some highly emotional games over Christmas against Edinburgh, it was great to see the players being as motivated last night against what was on paper a very tough side.

"Most of the Treviso team are also in the Italian national side."

Treviso had arrived in Glasgow on the back of three consecutive wins in the tournament - a pair of victories over fellow Italians Zebre either side of Christmas and a 32-13 success over Newport Gwent Dragons at the start of December.

But a moment of indiscipline cost them dear against the Scots when Manoa Vosawai was sent off for a spear tackle on towering lock Al Kellock after only five minutes.

"We were helped by their back-rower picking up a red card early in the game and from then on it was really us who dominated play," said Townsend.

Glasgow are 11 points behind Rabo leaders Ulster and a bonus point in the win over the northern Italians helped them into second place in their own right, on 41 points.

However, Leinster, Ospreys, Scarlets and Munster are all within four points of Townsend's team, proof that competition for a top-four spot will be tight.

"You've got to aim to get wins every week," explained the coach.

"When we played Leinster and Munster after the November break we realised they are two of the best teams in Europe.

"We lost 6-0 to Leinster, so that was very competitive. We weren't as competitive over at Munster but it's the only game that we have lost by more than eight points this season so we have been really pleased by the effort week in, week out and by the progress made by this squad."

Asked if the Glasgow players were trying that bit harder given the approaching Six Nations tournament and the appointment of Scott Johnson as interim Scotland manager, Townsend replied: "Probably subconsciously.

"In the 1872 Cup games [against Edinburgh] you know you are up against potential rivals for a position in the Six Nations squad.

"Our goal is to perform and to get those wins and to get into the play-off position and that has not changed this season.

"But I'd like to think that a number of Glasgow players have pushed their way into the thoughts of Scott and the rest of the coaching team."