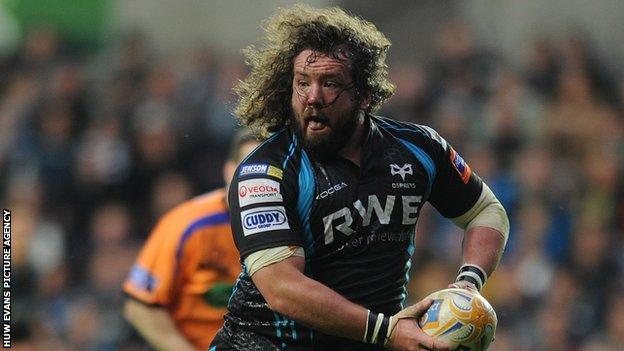 Adam Jones has condemned the Ospreys' display in their 16-15 Pro 12 win over Zebre as "shocking" and "rubbish".

Despite rising to fourth in the table, Jones says there were no positives in their display.

And he warned that a repeat in the Heineken Cup against Leicester on Sunday, 13 January would lead to a heavy defeat at the Liberty Stadium.

"If we play like that next week, we're going to get absolutely stuffed," said tight-head prop Jones.

Fly-half Dan Biggar rescued the Ospreys against winless Pro12 Italian side Zebre in Swansea on Friday by scoring all their points.

Jones, 31, led the team and said: "It was a hell of a frustrating game.

"I think we sort of dominated the set piece and they were excellent in the breakdown and didn't allow us to play much.

"We were shocking, to be honest. We were rubbish and… we've said a few home truths and if we play like that next week, we're going to get absolutely stuffed.

"You can look at as many excuses as you want.

"We spoke in the week about how physical it would be, they'd always be a 100% team… and you've got to match them in the breakdown otherwise you come unstuck, like it nearly did."

Jones says the Ospreys' run of three games in nine days, starting with a 26-3 win over Welsh Pro12 rivals the Scarlets on Boxing Day was no excuse.

"That's the nature of Christmas," he said. "It's always the same and we're not going to make excuses... and I don't think Leicester will hold us in too much fear if they watch a video of that game [against Zebre].

"We won and we've gone into the top four, but I don't think there are many positives to take out of it.

The Ospreys lie third in the European pool led by Leicester with Toulouse in second place and Treviso last.

The Welsh side are unlikely to make the quarter-finals, but good wins against Leicester and Treviso in their remaining fixtures could lead to an Amlin Challenge Cup quarter-final place.

"We've got a bit of history with Leicester," said Jones, who suffered a knee injury when the the Ospreys