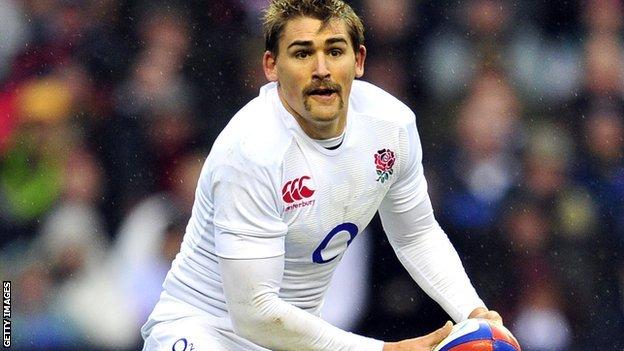 England fly-half Toby Flood and prop Alex Corbisiero are both in danger of missing the start of the Six Nations campaign in February.

Leicester's Flood has been cited for an alleged tip tackle on Worcester counterpart Andy Goode in the Tigers' 19-14 Premiership win on Friday.

If found guilty on Tuesday, Flood could be banned and may miss England's opener at home to Scotland on 2 February.

Corbisiero, 24, is also a doubt as he battles with a recurring knee injury.

The London Irish prop, who has 16 England caps, was selected to start Saturday's 18-12 Premiership win at Gloucester, but was forced to withdraw before kick-off because of persistent knee trouble.

"It is a tough time for him, and it is a difficult one to balance.

"His knee is a mess. He has played one-and-a-half games for us this season, and it is very disappointing.

"I couldn't tell you if he is going to play next week or not. He has got degenerative knee issues."

A toe injury cost Flood his England starting place to Saracens' Owen Farrell for the victory against New Zealand in December.

But he converted two penalty tries against Worcester to take Leicester back to the top of the Premiership.

His loss could seriously dent Tigers' Heineken Cup quarter-final hopes as Leicester will almost certainly need to beat both the Ospreys and Toulouse late this month to progress.

England coach Stuart Lancaster, though, will be boosted by the return of Leicester flanker Tom Croft following an eight-month injury absence.

"It is good to have those 50 minutes in the bank," Croft said.

"I was hoping to be back around November/December time, and when that didn't happen it was probably the most frustrating time.

"In all honesty, I have thought no further ahead than my first game back. I have now ticked that box and all I can do is play when I get the chance."