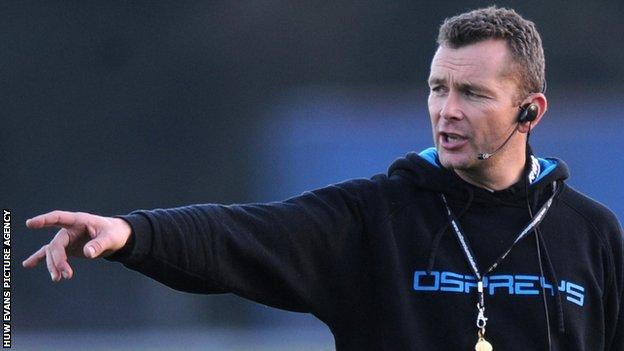 "No head coach position should be taken for granted... and I am flattered and honoured to have received the Connacht offer," Holley told BBC Wales Sport.

"However, my decision is based purely on the timing and my current personal circumstances."

The Ospreys and Holley parted company in February, 2012, ending his nine-year association with the region.

Since then Holley has become a pundit, often working for BBC Wales.

But while admitting that the decision to turn down the Connacht job was a difficult one, he hinted that a return to coaching is still on the agenda.

"The professionalism, vision and drive of the Connacht board in particular has made this a tough decision," Holley admitted.

"I remain committed to rugby and am excited about some opportunities that are on the horizon."

He became assistant to current London Welsh boss Lyn Jones at the Ospreys when they were launched in 2003.

Following Jones' May 2008 exit, Holley took charge with ex-Wales captain John Humphreys as his assistant for the 2008-09 season.

Current Scotland interim coach Scott Johnson then joined in 2009 to head a three-man coaching team including Holley and they led the side to the Heineken Cup quarter-finals in 2010, where they lost 29-28 to Biarritz.

That disappointment spurred them on to winning the Magners League, taking the title in the competition's inaugural play-off final against Leinster in Dublin.

However, the Ospreys have not moved beyond the Heineken Cup quarter-finals in subsequent seasons.

The Swansea-based region did not reach the 2010-11 knock-out stages and a 36-5 defeat by Biarritz in the 2011-12 season's final Pool Five clash ended their hopes, after they had also twice lost to Saracens and drawn at Treviso.

They lie third in the 2012-13 campaign in Pool 2 behind Toulouse and Leicester.

But the side coached by Steve Tandy face Leicester Tigers at the Liberty Stadium on Sunday, 13 January hoping to have a future in Europe this season.

But good wins over the Tigers and then at Treviso could see the Ospreys make the second-tier Amlin Challenge Cup quarter-finals.