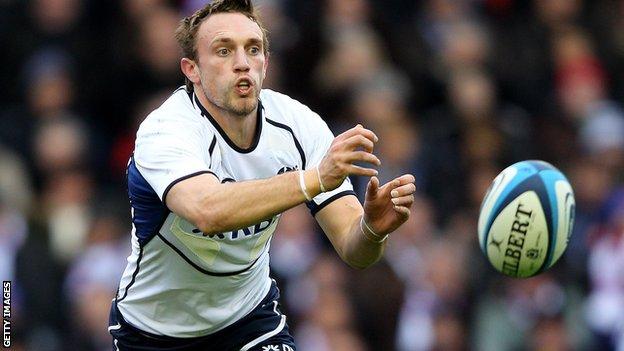 The 31-year-old made 85 appearances for Scotland over 10 years and skippered his country on 14 occasions.

"I'm in the very fortunate position of being able to decide myself when my international career ends," announced Blair. "For me, that time is now."

Blair, who moved to Brive from Edinburgh in the summer, scored seven international tries.

"A place in the squad at the World Cup in 2015 is not a realistic personal target and, with that in mind, it's right for Scottish rugby and the Scotland team, that other players gain experience in a pivotal position," he explained.

"There's no doubt that moving our family to France has played a part in my decision. Our son Rory is now at school here and we have an 11-week-old daughter, Lucy, who was born in Brive.

"However, it's a combination of reasons that's led to my standing down from international rugby, not just one factor.

"I have enjoyed immensely representing my country for more than 10 years and will miss that exhilarating feeling of running out to a capacity crowd with the whole country behind you.

"The noise when leading the team out for the first time as captain at Murrayfield against England in 2008, when we won 15-9, still makes the hair on the back of my neck stand up when I think about it.

"I want to thank everyone - my family, the Scotland management teams past and present, my team mates and our supporters - for their enormous contribution to my international career. I have been very fortunate to have these people around me."

Blair toured with the British and Irish Lions in 2009 and was nominated for IRB World Player of the Year in 2008.

He made his Scotland debut against Canada in 2002 and last played in November's defeat to South Africa at Murrayfield.

Henry Pyrgos, Rory Lawson and Greig Laidlaw are other options for the number nine jersey.