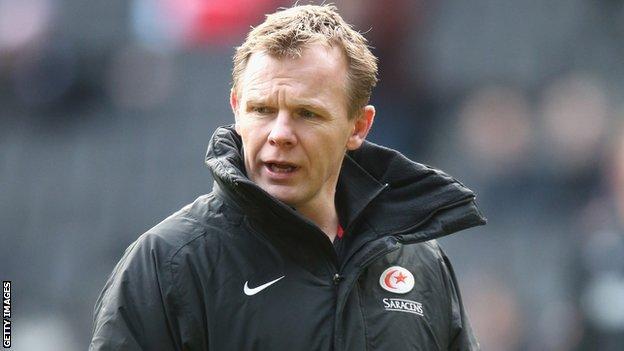 Saracens director of rugby Mark McCall has signed a new contract at the club until the summer of 2015.

The 45-year-old took over from Brendan Venter midway through the 2010-11 campaign and led the north London club to their first ever Premiership title.

They lost to Leicester in last season's semi-final, and also reached the last four of the Heineken Cup.

"Mark has provided outstanding service for the past three and a half years," said chairman Nigel Wray.

"We are delighted he has agreed to continue his excellent work.

"He leads a strong and talented coaching team with great skill and fantastic commitment and we are very confident he will continue to guide and inspire the development of the squad."

"Paul has proved himself to be one of the most talented young coaches in England, and we are delighted he has agreed to continue his excellent work at Saracens," added Wray.

McCall joined Saracens as first-team coach in 2009, working under Venter, and was promoted to director of rugby after the South African took on a technical director role.

The former Ulster and Ireland centre, who was already committed to a contract until 2014,

But his side have remained competitive in the Premiership, where they currently sit second, and can secure a place in the Heineken Cup knockout stages for a second successive season with victory at Racing Metro this weekend.

He will also help oversee the club's move to a new stadium in Barnet this month, with an LV= Cup tie against Cardiff the first fixture on the Allianz Park synthetic pitch.