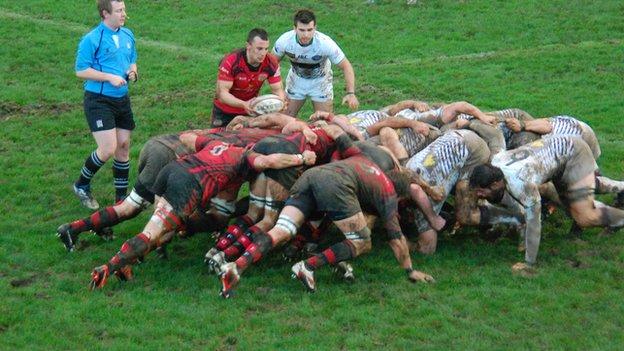 Leeds leapfrogged Jersey in their British and Irish Cup group with a 27-12 win over the islanders.

Tries from captain Ryan Burrows, winger Curtis Wilson and flanker Chris Walker put the Yorkshire side in control at half-time.

Wilson's second clinched the bonus point for the visitors before Jersey hit back with two penalty-tries.

Leeds climb to third in Pool Five, one point above the islanders who slip to bottom spot.

Both teams already knew they were out of the tournament before kick-off at St Peter, but Leeds seemed to play at a higher tempo and with more purpose early on.

Wilson's first in the corner after half-an-hour extended the lead and when Walker went over following a line-out just before the break Jersey faced a 22-0 deficit.

Wilson's second try sent the visitors on their way to a five-point haul but to their credit the islanders battled on and were awarded two penalty-tries.

The first came when Dominic Barrow was sin-binned and then a scrum collapsed near the try-line.

The second was a carbon-copy and came just moments after Walker was shown red after a brawl.

We really dominated the game and completely controlled it

"We need to learn, need to move on again and understand that we can't start the game as badly as that," said Jersey coach Ben Harvey.

"The tempo was very, very high from Leeds but the accuracy was there.

"Rory Clegg's a Premiership player and at fly-half he was terrific today, he just controlled the game and we couldn't really lay a hand on him."

Jersey travel to Pontypridd in their final Pool Five match next Saturday while Leeds face leaders Leinster A.

"I thought we were excellent, we really dominated the game and completely controlled it," said Leeds boss Diccon Edwards.

"The balance swung in the last 20 minutes with some scrum interpretations and I'm going to talk to the referee about that.

"I thought in the majority [of the game] our attitude and performance level was outstanding."