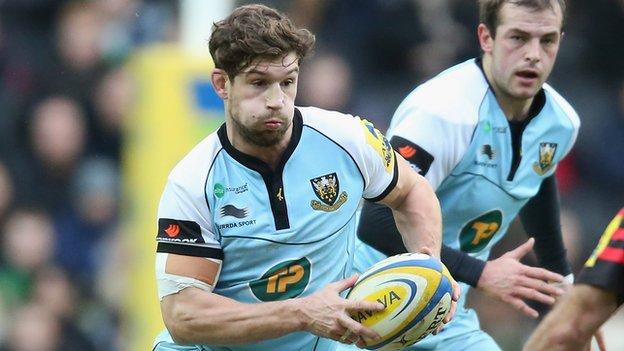 The victory came off the back of defeats by the Premiership's top two - Harlequins and Saracens - leading to questions over Saints' consistency.

"We've had a lot of slagging off in the media," Waldouck told BBC Northampton.

"We've come under a lot of criticism recently, so it was important to show to everyone we believe in ourselves."

Saints were soundly beaten 18-9 by Quins at Franklin's Gardens but were edged out by a single point when they faced Sarries at Stadium MK last week.

Success at Sandy Park at the weekend though kept them within a point of the Premiership's top four.

"We lost by a point last week to a top team in the Premiership," added 25-year-old Waldouck.

"There's not many trophies won in January, so we can make a push towards the end of the season.

"It's not nice to be slagged off and it's nice to go to a tough place like Exeter and win like we did.

"Criticism probably provides a bit of motivation but there's a lot of belief in the team and we can draw on that."

Jim Mallinder's side reignited their Heineken Cup campaign with a win at Ulster in December, but need positive results in their two remaining Pool 4 games against Castres and Glasgow if they are to progress to the quarter-finals.

"It's a huge competition for us, we're still alive," added Waldouck, who won the tournament with Wasps in 2007.

"We need two big results the next two weekends and hopefully we can take some momentum into the Heineken Cup."