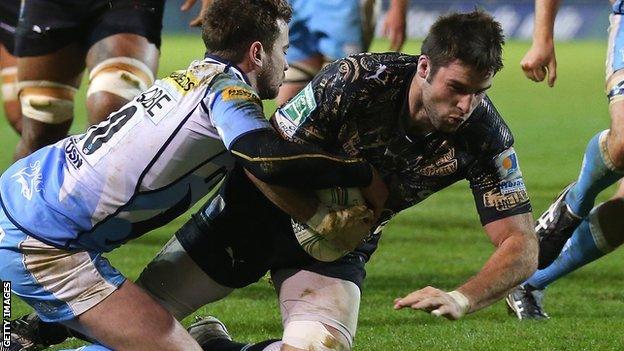 Struggling Sale were well beaten as Montpellier kept alive their Heineken Cup qualification hopes with a bonus-point win in Salford.

Johnnie Beattie scored the visitors' second try, with Cipriani making it 12-6 at the break.

With their quarter-final hopes sunk in December by back-to-back defeats by Toulon, Sharks director of rugby Steve Diamond opted to give run-outs to several fringe players and, as expected, they proved no match for their star-studded visitors.

It proved to be a testing debut for number eight Josh Beaumont, the 20-year-old son of former England captain Bill Beaumont, who found himself up against man-of-the-match Johnnie Beattie.

The bonus-point victory moves Montpellier level with Pool Six leaders Toulon, who play Cardiff Blues on Sunday, with Jonny Wilkinson's Toulon team then travelling to Montpellier on the final weekend.

An incisive break by Montpellier full-back Pierre Berard was supported by skipper Fulgence Ouedraogo, who sent winger Yohann Artru over by the posts for the game's opening try on nine minutes.

Scrum-half Paillaugue added the conversion and although Sale fly-half Cipriani pulled three points back with an 18th-minute penalty, the visitors added a second score seven minutes before the break.

Beattie picked up a loose ball to charge over and although Cipriani cut the deficit to 12-6 with a second penalty on the stroke of half-time, that was as close as Sale, who are bottom of the English Premiership, were to get.

Paillaugue stretched his side's lead with a 47th-minute penalty before dangerous centre Thomas Combezou sliced through the heart of the Sharks defence and the supporting Timoci Nagusa sent Berard over for a third try.

Centre Santiago Fernandez had a chance to secure the bonus point but he dropped Nagusa's pass on the line, while the impressive Beattie was twice held up over the line.

But the pressure finally told two minutes from the end when the Sale pack crumbled once too often and referee Leighton Hodges awarded Montpellier a penalty try, which replacement Eric Escande converted.

"I thought after the first scrum of the game we were in for a really hard night but they showed a lot of character.

"There were a lot of positives moving forward into the league. It could have been a lot worse - we've got a lot out of today.

"A guy who takes a lot of the press generally who played well tonight was Danny Cipriani. If he sticks to his kicking game for us he will be great.

"He keeps the forwards going. We were in the game at half-time because of Danny's kicking."