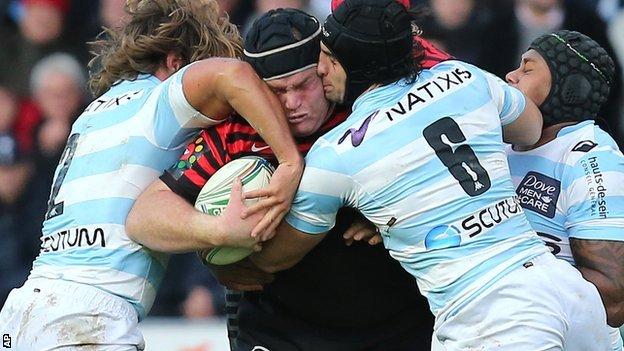 Owen Farrell kicked a Heineken Cup record 10 penalties as Saracens moved to the verge of the quarter-finals by fighting back to win at Racing Metro.

The hosts ran in tries through Luc Ducalcon and Juan Imoff, with a brace, but six Farrell penalties made it 25-18 at half-time.

A converted Chris Wyles try and two Farrell penalties to one from Sebastien Descons gave Sarries a 31-28 lead.

And two more Farrell penalties leave Saracens in full control of Group One.

The result means Saracens have 18 points and lead the pool by six points from Racing, although with Munster facing Edinburgh on Sunday they are not yet guaranteed to take top spot.

However, with Saracens hosting bottom side Edinburgh in the final round (Munster welcome Racing), the Londoners look odds-on to reach the last eight.

Racing had decided to take the game on the road to the Stade de la Beaujoire in Nantes, the scene of Wales' famous defeat by Fiji in the 2007 World Cup, and they were rewarded with a crowd of 30,000.

They were treated to a classic game of two halves, with Racing's attacking prowess threatening to blow the visitors away in the first half.

But Saracens are renowned for their mental strength and a combination of Racing's indiscipline and Saracens' power at the scrum meant it was only 25-18 at half-time.

And after the break Saracens' defensive strength, combined with the laser-guided boot of England fly-half Farrell, who kicked 11 from 11 in all, left the French fans mute in disbelief.

The game started in worrying fashion as Saracens winger David Strettle suffered a head injury in a challenge from Racing centre Fabrice Estebanez.

After a 10-minute delay while Strettle was tended to by the medical staff he was taken off the field on a stretcher but Saracens reported he "was up and about after the game and there appeared to be no long term damage".

The hosts were the quickest to get going after the game restarted and a sublime dummy from Juan Martin Hernandez set up Ducalcon to rumble over with help from fellow prop Eddy Ben Arous. Descons added the conversion.

Carrying the ball is all part of the armoury of the modern prop but scrummaging will always be their bread and butter and the home front row was exposed a couple of minutes later by the power of the Saracens pack.

They collapsed the scrum and Farrell pinged over the kick to get Sarries on the board and set the pattern for the first half, with Sarries chipping away with penalties every time Racing scored.

Twice Argentine winger Imhoff, clearly right at home in the pale blue and white stripes favoured by both Racing and Argentina, raced clear for spectacular tries down the right, the latter converted by Descons.

The hosts should have been out of sight but twice Farrell immediately hit back with penalties to cut the lead to 10 points.

Both sides lost a man to the sin bin before half-time and, with Farell and Descons trading penalties, Racing led 25-18 at the break.

Wyles scythed through for a cracking Saracens score two minutes into the second half and when Farrell converted and then added a penalty Saracens, astonishingly, were in front 28-25, despite losing Chris Ashton to the sin bin.

The two sides were going blow for blow, with Racing fizzing about trying to break down the now rock solid defence of the visitors, and with Descons and Farrell trading penalties, Saracens held a three-point lead just after the hour mark.

By now Saracens were pinning the hosts back in their own half and although Farrell had a long-range drop-goal deflected wide, he landed a further penalty to give the Premiership side a little extra breathing space.

Racing launched one last desperate attack and were awarded a penalty. Hernandez stepped up to kick to the corner and give the hosts the platform for one last assault but, unforgivably, he kicked the ball dead.

Racing knew their chance had gone and Farrell twisted the knife as he drilled over a long-range penalty with the last kick of the match to deprive the hosts of even a losing bonus point.

"In the last four years we have been building in this competition and a win against a very good French side in France continues that.

"It was a fantastic performance and we're very proud of the team after bouncing back from the setbacks in the first half of the early injury, the tries and a yellow card.

"We were off our game in that first half and not working hard enough, but we knew at half-time that if we rectify things then we could win the match.

"We still have an important job to do next week against Edinburgh to secure the pool winner's spot."