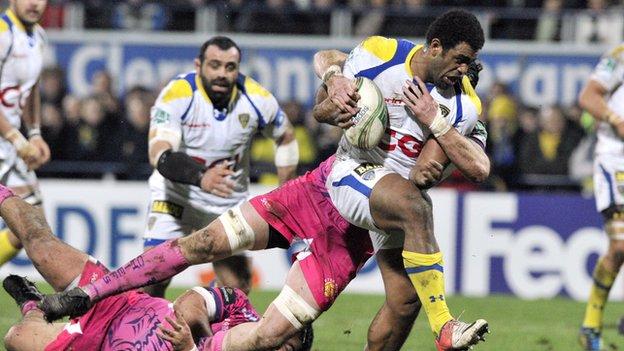 Converted tries from Wesley Fofana and Jean Marcel Buttin helped the hosts into a 20-3 lead at the break, Gareth Steenson replying with a penalty.

And tries from Buttin and Napolioni Nalaga inside the last 10 minutes wrapped up a convincing victory.

The defeat ended Exeter's mathematical hopes of qualification in Europe.

They face defending champions Leinster next in the competition.

Exeter head coach Rob Baxter said: "It's not the big drama some people might think it is. There are some very good teams in the competition and Clermont are certainly one of them.

"We had our moments in the game and we didn't quite see them off. The reality of it is we have come up against a very good side.

"We were noticeably better in the first quarter of the second half. I'm a bit disappointed with us crumbling in the final quarter. But we were a bit unfortunate.

"We have to learn from this and improve instead of being down on ourselves."