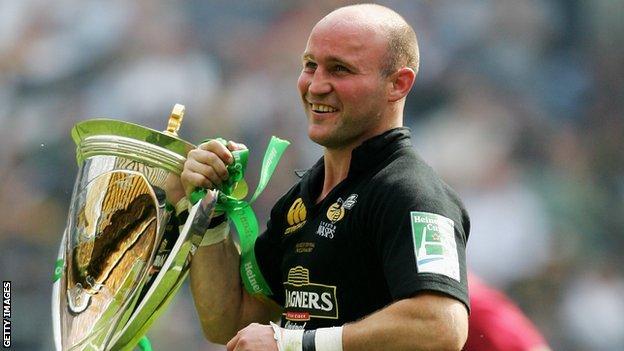 Josh Lewsey has said former England team-mate Alex King has the talent to create a "championship-winning" mentality at Northampton Saints.

King, 37, has been appointed backs coach at Saints.

The King and Lewsey link

The pair initially played alongside each other at Bristol University and then later for England and Wasps, during the most successful period of the London club's history.

"Championship teams have a culture of knowing what to do at the right time," Lewsey told BBC Northampton.

"It's a mental fortitude under pressure to choose the right option. Kingy had that as a player and I'm sure he will work to instil that at Northampton."

Five-time capped King played among the backs with Lewsey for England and Wasps, where he spent 11 seasons and won four Premiership titles and the Heineken Cup twice.

As a coach he had helped Clermont Auvergne to top a Heineken Cup pool containing Leinster and Exeter, and to second place in the Top 14.

He replaces Paul Grayson at Franklin's Gardens, who ended his 19-year association with the club in November.

"He's obviously done his apprenticeship over in France. It pleased me that he stepped away from the English game," added Lewsey, who won 55 England caps, plus three for the Lions.

"Rugby generally in the Premiership needs some fresh innovation and I think fresh blood and fresh thoughts can only be a good thing.