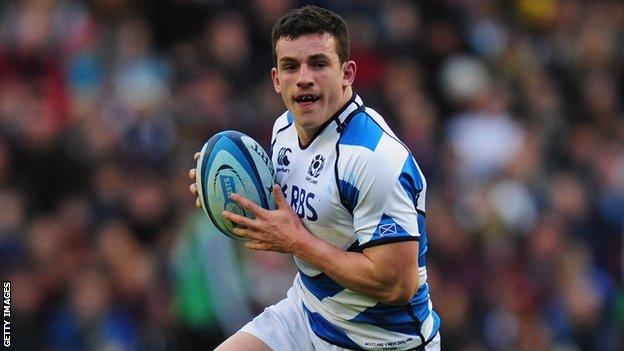 The Scots lost all three Tests in their autumn series, leading to the resignation of Andy Robinson as coach.

Robinson has since been replaced by Scott Johnson, whose first game is the Six Nations opener against England at Twickenham on 2 February.

"The group of the players we have is definitely good enough to win major tournaments," Scott told BBC Scotland.

"The key obviously is consistency and raising our game at the right moments and not just having one-off victories against the best teams in the world and then falling to teams that are lower than us in the rankings.

"I believe we're good enough to win the Six Nations. In previous years there's been a lot of expectation heaped on the national team and when we've not got off to the best start like we did last year - we narrowly lost to England - it's hard to pick it up.

"So, I think a good start is vital and if we beat England at Twickenham, anything can happen.

"Nobody really expected much of us this year because we didn't have a great autumn series so maybe that'll work in our favour."

Edinburgh's Scott hopes an improvement in national team performance fortunes can boost the whole of the Scottish rugby.

"Every major tournament you go into is always very important," he added.

"But, especially as it's Scott's first tournament in charge, all the players will be looking to step up and do a job for him and for each other.

"The last time we played together, we had a really disappointing loss against Tonga so we'll still hold that in our memory and take it in to the Six Nations.

"We had a poor autumn series and just for the supporters and everyone involved in Scottish rugby, when the national team's doing well, it kind of energises everyone so we've got a big responsibility on our shoulders.

"There's every reason that we should be really looking forward to this.

"If the national team's doing well, it does rejuvenate everyone so that's one of our targets for the Six Nations."

37 comments
Back to top
unknown