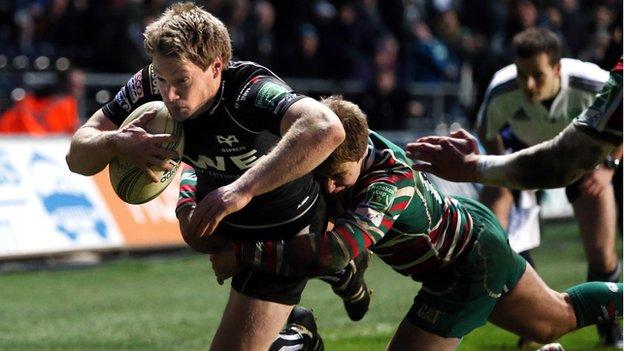 Leicester face a winner-takes-all clash against Toulouse next Sunday after a thrilling draw at Ospreys that ends the hosts' Heineken Cup campaign.

Joe Bearman's try and a conversion and penalty from Dan Biggar made it 10-0.

Toby Flood cut the gap to 10-3 and his conversion levelled matters after Ben Youngs went over with 13 minutes left.

Biggar missed five tricky kicks in all, and he was just inches wide from securing a dramatic victory in a game the hosts dominated for long periods.

The result means Ospreys cannot reach the knockout stages but it means Leicester will host Toulouse, who beat Treviso 35-14, next Sunday knowing that victory over the French giants will mean the Tigers will top Pool Two, although a home quarter-final is now out of reach.

It was another thrilling instalment in the on-going Heineken Cup battle between Ospreys and Leicester.

Ospreys have not played anyone more often in Europe's showpiece club tournament, while the Tigers have only met Leinster more frequently, and the draw is the second time they have finished level in eight meetings.

The two main contenders for the tight-head berths in the Lions squad next summer, Ospreys' Adam Jones and Leicester's Dan Cole, were in action and it was the Welshman who drew first blood, causing Tigers loose-head Marcos Ayerza to fold in.

However, Biggar missed the resulting penalty and he failed with two more difficult attempts - hitting the bar with one long-range effort - as the hosts failed to make the most of their early pressure.

They finally broke the deadlock just before the half-hour mark when a break from Ospreys' classy Samoa scrum-half Kahn Fotuali'i earned the hosts a much simpler penalty and this time Biggar bisected the posts.

Despite the minimal scoring both sides were playing with real adventure but the hosts, helped by their excellence at the breakdown, were clearly on top and Mathew Tait had to make two important tackles to halt threatening Ospreys attacks.

The former England man, back on track after a long term injury, then escaped without punishment after contact with Justin Tipuric, who had broken through and chipped over the full-back, saw the home fans howling for a penalty.

But they did not have to wait long for the first try and it was a dazzling score, sparked once again by Fotuali'i with a punchy break before feeding the supporting Tipuric.

The open-side threw out a fine pass to Ryan Bevington and although the Leicester cover got across, the loose-head prop popped the ball to number eight Bearman to cut back against the grain and finish in style, with Biggar converting.

Flood popped over a penalty to make it 10-3 at the break and the hosts suffered a blow as Wales back-five forward Ryan Jones went off with a damaged thumb.

He was later joined by hooker Richard Hibbard, who went off nursing his arm, in the latest in a series of injury blows for the Grand Slam champions.

Leicester were under the cosh but when Biggar hit the woodwork for a second time - his fourth penalty miss in all - it gave Leicester a glimmer of hope and they finally clicked into gear as Youngs sniped over after a sweeping attack.

Flood converted and although the visitors suffered a major blow as centre Manu Tuilagi went off injured, they quickly scored their second try.

Anthony Allen was hauled down just short but when the Tigers recycled the ball Morris dived over in the right corner for an unconverted score.

However, Ospreys were not finished and a searing counter-attack from 20-year-old wing Eli Walker carried them deep into Leicester territory before Spratt went over near the right touchline.

Biggar's conversion was fractionally wide and the draw means Leicester go into a decider against Toulouse in the final round of pool matches knowing victory will see them into the knock-out stages.

"I am disappointed with the result - I thought we deserved more. It is a really deflated changing room.

"Most other teams would have thrown the towel in at 15-10 behind, but this group fights like no team I've seen or played in.

"They don't know when they are beaten, and they put in another massive shift today."

"It was a tough game, Ospreys played very well. We made far too many errors and we hurt ourselves but we stuck in there as Leicester teams do. In the end we deserved a draw.

"We got ourselves in the lead with a few minutes to go and we couldn't close it out for once, which was disappointing.

"Whatever happened today we had to win next week. This is where we wanted to be at the start of what has been a very tough pool - every game we've played has been very difficult.

"Three o'clock next Sunday we're bringing the most successful side in European history to a sold-out Welford Road. It's winner takes all - that's where you want to be."